For example, take a look at this graph.  Since 1991, the population aged 20-44 has dropped by 250,000 across Atlantic Canada – a substantial drop that is more pronounced as the boomers head into retirement.  The wave of younger Canadians that powered economic growth in the region for decades crested in 1991 – 25 years ago – and has been receding since. 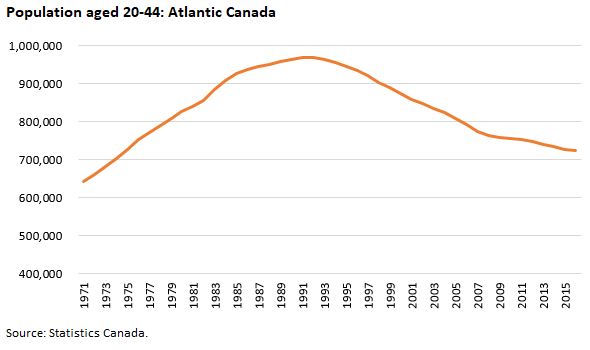 Take a look at the same graph for Canada.  Around 1991 the population aged 20-44 crested – just like Atlantic Canada – but David Foot published his dumb, obvious point about booms, busts and echos and the country cranked up the importation of young talent from abroad.  This effort arrested the decline and led to strong growth in this age cohort in the last decade.   Interestingly some groups like the Conference Board say this is not enough – that Canada needs to dramatically increase its immigration in the coming years. 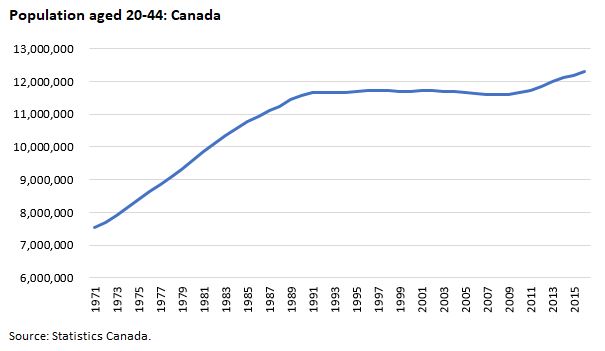 There are more dumb, obvious points.  Atlantic Canada’s economy is in the midst of substantial upheaval due to demographics, changing industries and increased global competition.  We need to be far more focused on internationalizing our economy.  Politicians gleefully talk about the level of exports generated from this economy but fail to mention that these exports are still primarily centered on natural resources.  If you back out lobster, oil, wood, etc. the region is not particularly good at exporting – with the someone maligned sector – contact centres/business services – as a more than $2 billion export sector for the region.

Here’s another dumb, obvious point – federal government support should align with the region’s needs.  In reality it tends to be the opposite.   Ontario, Alberta and BC – growing provinces will demand the feds provide cash for public transportation, new roads/bridges and post-secondary infrastructure to respond to rapid population growth.  The feds will say sure thing and develop a national program offering cash if you build new public transportation, roads/bridges and post-secondary infrastructure – and you have to put your own money on the table too. So a place like Atlantic Canada will get hundreds of millions of dollars to build new infrastructure even as the population that will use that infrastructure is stagnating or even decline.  Why wouldn’t the feds take a couple of hundred million out of that pie and put it where it is needed – to actually grow the population needed to use infrastructure? Because that is not the way things are done in Canada.  The feds – Libs and Tories alike- develop national programs based mostly on Ontario, Quebec, etc. requirements (think about the new bias towards large clusters such as AI) and then try to force them to fit in the Atlantic Canada context.

There are certainly many other dumb, obvious points – or elephants in the room – around local government reform, urbanization, new sources of entrepreneurship, how to use our smaller universities to drive R&D, etc.  But there isn’t much interest in doing anything substantial about it.

So why not bite the bullet and bring in Galdwell – he probably charges $100k just to show up – and maybe he can make the dumb, obvious points and maybe someone might listen.

1 thought on “Calling Malcolm Gladwell: Walk amongst the elephants in the Atlantic Canada room”