Since I didn’t get my invitation to speak to the parliamentary committee studying immigration and Atlantic Canada even though I probably have analyzed more data on this than just about anyone else, I’ll give you my thumbnail analysis of the issue here.

New Brunswick (and for the most part Atlantic Canada) hasn’t had a ‘wave’ of immigrants – i.e. an amount that significantly impacted population levels – since the mid 19th century.  This needs to be front and centre in the conversation.  Integrating new immigrants into existing strong immigrant ecosystems (i.e. the large urbans) is easier.  Integrating immigrants into western Canada – which built much of its current population on inward migration is easier.  Integrating new immigrants into Atlantic Canada with no recent history will be harder and will require significant community-level focus. I have suggested that every immigrant family should be paired with an NB family for at least a year to help integrate them into the community.

New Brunswick has a long history of little interest in attracting immigrants.  After WW2 Canada accepted a wave of new immigrants – mostly from Europe.  I read an academic paper on this recently that stated the NB premier at the time said he didn’t want more immigrants to New Brunswick because of that old canard about ‘unemployment’ here. This could have been the largest single misstep in NB history.  The example across North America is clear – communities with sustained immigrant flows tend to have lower unemployment rates.  Our preoccupation with seasonal industries-EI-inflated unemployment has distorted the conversation on immigration.  I believe if we had put a greater focus on immigration it would have led to fewer young people leaving the province.

Immigrants are essentially the only source of labour force growth across the country.  Between 2010 and 2016 the Canadian labour force expanded by just under 900,000 and 823,600 were landed immigrants.  In provinces such as New Brunswick the born in Canada workforce has been in decline for multiple years.  I can’t see any way to boost the provincial labour market without a dramatic expansion of immigration. 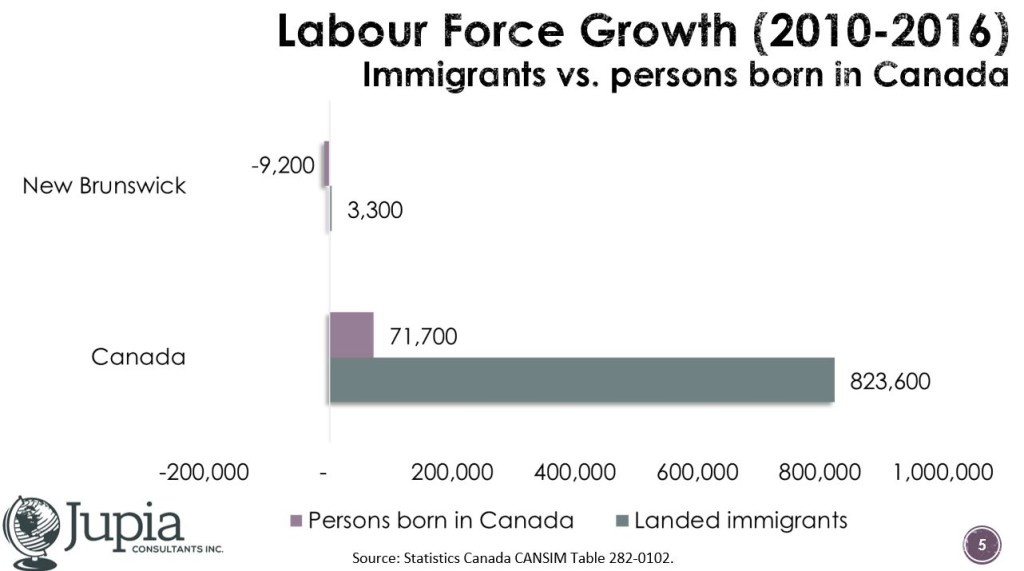 Immigrants will be more mobile than entrenched, multi-generational Canadians.  Get used to it.   Interprovincial mobility rates rose when Manitoba started to significantly expand its immigration a decade ago. We can’t obsess over this.  I found out this week that two of my favourite immigrants were leaving – both to western Canada.  This is a reality.  They don’t have the anchors here that many of us have.  We can and should do more to anchor them here – networks, schools, churches, etc. but we shouldn’t use this as an excuse to not attract immigrants.  We just need to ensure that we have two coming in for every one that leaves.  And this excuse that we will flood Toronto with immigrants is pathetic.  The broader Toronto region attracts nearly 100,000 immigrants per year.  Any residual coming from Atlantic Canada would be a rounding error.

Don’t obsess with ‘young people leaving’.   We encourage a large share of young people to go into university even as there are thousands of new jobs every year that don’t require university degrees – manufacturing, natural resources, services, etc.  That’s okay but don’t expect them all to stay in New Brunswick.  If you want university educated folks to stay you need a) a growing economy that is creating more local market-focused university education requiring jobs (dentists, nurses, lawyers, accountants, etc.); 2) an economy that is created more university education requiring export-focused jobs (engineers, computer programmers, designers, etc.) or 3) an economy where young educated people are starting new firms.  Other than that let ’em leave.  I find the people I meet that have spent a few years outside New Brunswick bring back valuable knowledge and perspective.  In fact, I would like every New Brunswicker to spend at least a year living outside the province.

Focus immigration efforts on attracting family and friends of existing immigrants.  This should be a no brainer.   As the fed speed up processing times for family class immigration nationally this will have little impact here because we have very few immigrants to begin with.  We should encourage the clustering of immigrants (not the ghetto-ization of new immigrants – big difference) and design our immigration programs to encourage/incentivize this.

Dramatically boost international post-secondary students – particularly in occupations that could be used to grow export industries.   Someone told me recently that UNB Fredericton has more engineering graduates living outside New Brunswick than living and working in-province.  They were critical of this.  Why?  Fredericton has one of the highest concentrations of engineers in Canada and a 40% export rate.   I say over-enrol and over-graduate people in key occupations such as computer programming, engineering, etc. and if some leave – who really cares?  Many will stay.  Many entrepreneurs will take advantage of this labour pool to start firms.  Worst case.  The kids stay here during school and spend, on average, $25,000 per year in our province.  And for immigrant students, they get to spend 2-4 years putting up with our winters.  If they survive they are good candidates to stay longer term.

Set hard targets.   There is a lot of wishy-washy on this which surprises me.   I can line up a number of economists that would say if you want to grow the Atlantic Canada economy in a sustainable way over the next couple of decades we will need to bring in at least one percent of the population each year as immigrants (Manitoba is running around 1.5% and the have the fastest GDP growth in the country).   Just do it.  Set a target of 7,500 to 8,000 for New Brunswick and then work backwards to figure out the resources needed to make that happen. 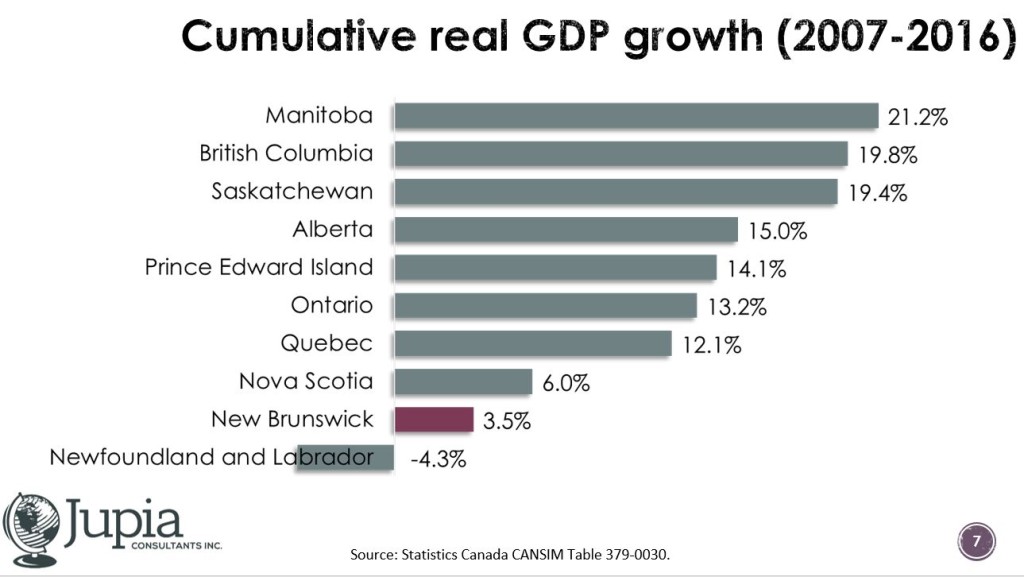 Tie new immigrants to actual jobs.  This is a bit counter-intuitive to my previous arguments but hear me out on this.   If you bring immigrants on a point scale that rewards highly educated immigrants but isn’t aligned with the needs in the labour market – that is a recipe for outward migration.  If we need home care workers, assembly line workers, truckers, contact centre agents, fish plant workers, etc. bring immigrants with the skills and aptitude to work those jobs.  Pay them a competitive wage and they are far less likely to leave because they would end up in a similar job at a similar salary in Toronto but in a higher cost of living environment.   Now, I’m not suggesting New Brunswick should go out and actively attract firms with ‘low wage’ jobs to move here but we need to ensure the NB labour market is meeting local demands – particularly for export-focused industries.  We can and should focus our growth efforts on higher wage jobs, entrepreneurship and other high value areas that should attract and retain immigrants (and NBers).

Reorient economic development from financial support for SMEs to talent attraction.  The feds gave Atlantic Canada the immigration pilot (thank you) and then said but there is no new money for these immigrants (huh?).   Normally the feds provide a cash payment per immigrant to fund things like settlement services.  But not this time.  This is an oversight.  Both federally and provincially we need to divert significant spending to talent attraction.  ACOA should become 50% a talent attraction agency.  Our provincial efforts should move significant dollars towards talent attraction and retention.  We talk a big game but until we put our money where our mouth is we will get limited results.

Finally, the federal government needs to fundamentally rethink this.  They may be still sore from the snub in the mid 1940s.  Imagine.  Back then the feds were begging us to take more immigrants.  Now the attitude is the opposite.  If the feds want a prosperous and sustainable Atlantic Canadian economy they need to work with us on a serious plan to attract and retain more immigrants here – entrepreneurs, skilled workers, not-so-skilled workers, post-secondary students, rural, urban – across the board.  There is zero value to Canada – and its social cohesion in the coming years – to have one region of the county withering away for no good reason.  Atlantic Canada has underpopulated urban centres, lots of wide open, rural areas, fallow farmland, lots of minerals and other natural resources.  It’s very easy to start a business here.  There are no real structural reasons why we could not see a wave of new population.  EI? Get over it.  I have heard this excuse for 30 years and I am tired of it.  If the feds want to massively reduce the number of people that use EI every year in New Brunswick then change the program.  If not don’t turn around and beat us over the head with it as a reason not to attract immigrants.