In October 2016, an old friend of New Brunswick Tim Coates partnered with one of the best researchers on what it takes to be a successful entrepreneur, Daniel Isenberg, on an important piece of analysis.  Published in the Harvard Business Review, the pair found that many of the most successful startups can be found in large corporation supply chains.  This was an interesting finding as a lot of the better known startups actually service end markets – think Uber, Airbnb, etc.

Another deep thinker, the estimable Dr. Herb Emery at UNB, made an almost throw away comment in a talk he gave recently.  He said that historically – and he meat this in the literal way – most startups occur in a region’s dominant industries.  If you have a large agricultural sector, entrepreneurs will rise up to address a market need locally and then take that innovation to national and international markets.

An an example, look at the agricultural implement manufacturing sector.  If Emery is right there would be a significant correlation between the size of the agriculture sector and the number of firms in NAICS 333110 serving this industry.  In fact, this is correct.  Ontario generates $4.4 billion worth of GDP from agriculture (direct) and has 83 firms serving the industry in NAICS 333110.  There are two adjacent counties – Waterloo and Wellington – that are home to nearly 10% of all the NAICS 333110 firms in Canada (there may be a Mennonite tie-in here but that is beyond my scope for today).  There are two counties in Manitoba that are also home to 10% of the national total. 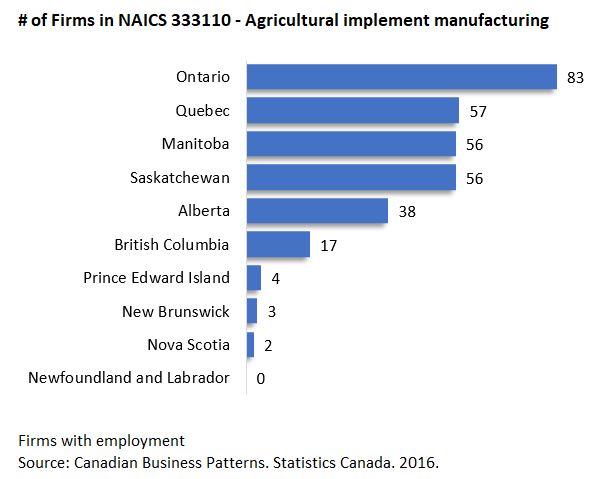 Just to allay your fears that these firms are just a few Mennonites building their own scythes, take a look at the export data.  As with the firm intensity, international export intensity is correlated to provinces with large agricultural sectors.  The data in the table is shown in $Millions just in case you are wondering.  So the Emery-Coates-Isenberg thesis seems to hold. 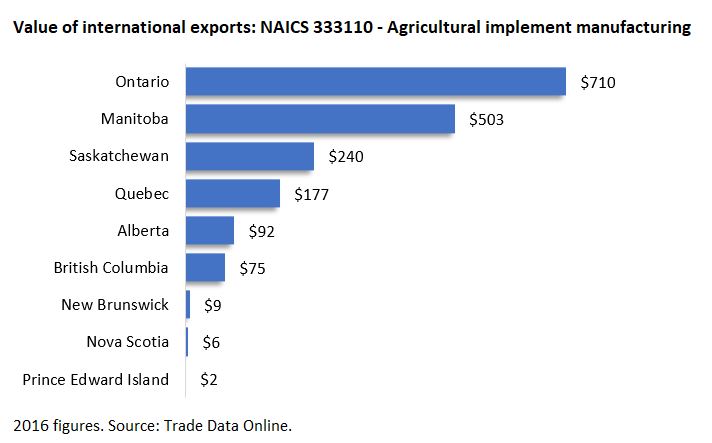 Now, we turn our attention to NAICS 333245 – Sawmill and woodworking machinery manufacturing.  As you would expect there are lots of firms in this sector in BC, Quebec, Ontario as those provinces have large forest products sectors.  But the outlier here is New Brunswick.  Even though the province has a very large forest products industry it has only one firm in this part of the supply chain.  If it had its ‘share’ of the national total it should have closer to 5 – or 5x as many as it does.   For those of you who are curious the exports profile fits the pattern.  Ontario generates $131 million, Quebec, $75 million, BC $44 million and NB $1.2 million from this sector. 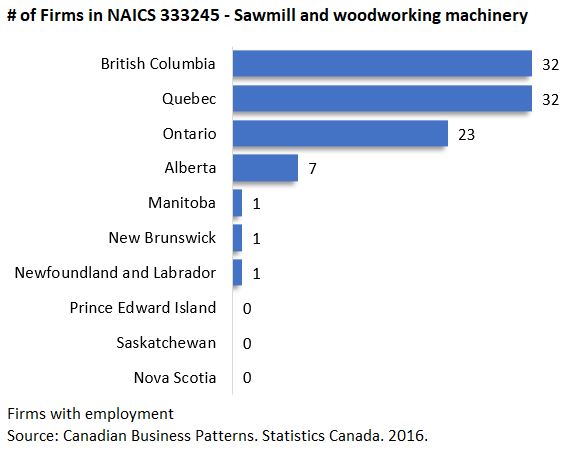 Again, this isn’t really a ‘small’ versus ‘big’ province issue. In the agricultural implement manufacturing sector Manitoba and Saskatchewan are home to 36% of the national total even though they are ‘small’.

Bottom line?  We need to put more brainpower to this issue.  Why are we not seeing innovative startups in our dominant industries such as forest products, seafood processing, blueberries, maple syrup, contact centres, etc.?   Don’t get me wrong there are some notable exceptions – Remsoft comes to mind – but we need to see more.

How?  It is already beginning. McCain Foods has a new initiative to deliberately work with startups to help address its big challenges and drive productivity.  Resson Aerospace is a good example here.  We need the rest of NB’s large firms to step up and think about how external startups could be part of the solution to their business challenges.

It’s a win-win.  The firms can access an innovation sandbox that would be almost impossible to replicate internally.  The startups get access to local markets – to get really good at something they can then take into global markets.

Where do the entrepreneurs come from?  That is broadly a subject for another day but they should be spinning out of the large firms themselves (restless), emerging out of universities (IP) or being attracted to New Brunswick to take advantage of a market need.

This should be part of New Brunswick’s startup ecosystem 2.0.  Over the last decade the infrastructure to support startups has ballooned but IMO there has been limited focus on how to align this with our big sectors and the Herb Emery wisdom.