I  am somewhat wary of dipping toe into any conversation about bilingualism in New Brunswick because, well, just because.  I am sure that a lot of readers are nodding their heads in agreement.

Anyway instead of worrying about why more English NBers are not taking up language training later in life we may want to worry about one of the real challenges.  It looks like, somewhat ironically, that French immersion graduates are more likely to leave New Brunswick than English only graduates.  The following table is taken from the 2011 NHS. The bar here is quite low – persons are asked if they have knowledge of French.  Presumably, virtually all graduates of French Immersion would answer yes to this question.

I don’t know the exact percentage of NB anglophone students in immersion but it is fairly high around 1/3 of total students (the table below aligns with this).  High enough that it should have, over time, a significant impact on the numbers.

But if you look at the data – young anglo NBers in school have ‘bilingualism’ rates in the 30%+.  Then it steadily declines to basically 20% in the 30-49 age group and reverts to the provincial average for all age groups for people 40+.   Back in 2000, 32% of Anglos were enrolled in French Immersion.   Someone who graduated high school in 2000 would have been nearly 30 by the time of the 2011 NHS.

Now before you get out your calculator – my math on this is fairly simple.  If kids in French Immersion are showing bilingualism rates of 33% – then you would think that this level would hold – dip a bit from inward migration, etc. but the fact that 33% claim knowledge of French when they are 18 and only 21% do by the age of 30 looks like to me that we are exporting a fairly significant share of bilingual anglophones.  The conventional wisdom is that unilingual anglos have to leave because they don’t speak French.  It looks like the opposite is taking place.

If we want to foster a bilingual society – at least at a conversational level – we more anglophones speaking French.  The best time to learn is during school.  If we lose them after then….. 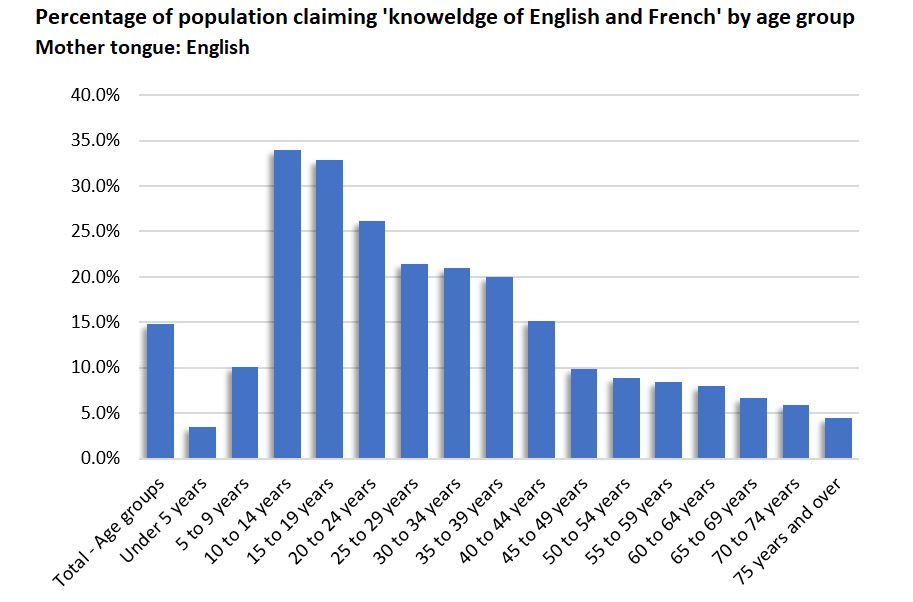