The new immigration pilot worked out with the feds is unique because the Atl. provinces can now attract needed workers across the labour market spectrum – from fish plant workers to engineers. I have had more than a few people question why we would want to attract immigrants into sectors not paying particularly high wages. The logic goes that the firms struggling to find workers should pay higher wages or become more productive. One economist said that the “only way” to reduce our 10% unemployment rate would be for firms to raise their wages to a level that would attract in workers.

In theory there may be some logic to this but in practice there are many other factors at play.  Firms in export industries compete in global markets and therefore cost competition is set globally.  If input costs increase too much in one location and not another it puts the former at a competitive disadvantage.  Productivity is a good thing for sure but many firms still require lots of workers. 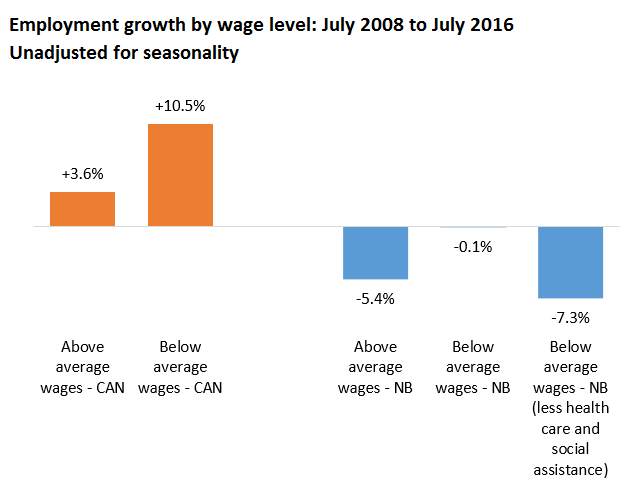 The compounding challenge here is that young New Brunswickers increasingly don’t want to work in ‘lower wage’ occupations.  Between 2008 and 2014 there was a 15% decline in the number of persons under the age of 35 declaring annual income of $35,000 or less – a 3x times larger drop than Canada as a whole . At first glance you might say that is a good thing but look at the following graph.  Look at Alberta.  The strongest economy over the period actually saw growth in the number of young people earning less than $35,000 per year.  Why?  Because there are lots of jobs in any economy – for better or worse – that pay below average wages.   A  strong and sustainable economy is one where there are workers to fill jobs across the spectrum – with a healthy upward pressure on wages over time. 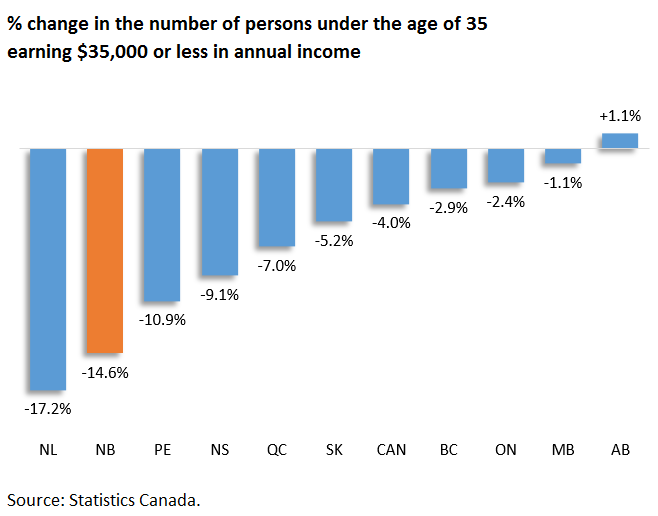 If you look at the case of Manitoba it has witnessed record numbers of young immigrants coming in to fill jobs in food manufacturing, back offices and other service industry jobs (it’s no accident they are second only behind Alberta in the chart above).  The wage levels aren’t particularly high but they are an order of magnitude higher than what the immigrants were earning before.

This could be the biggest public policy challenge of our time.