The population overall has significantly moved to the right – i.e. both NB and Canada are much older now and it has grown much faster across Canada –  but the mix in distribution has not changed much. 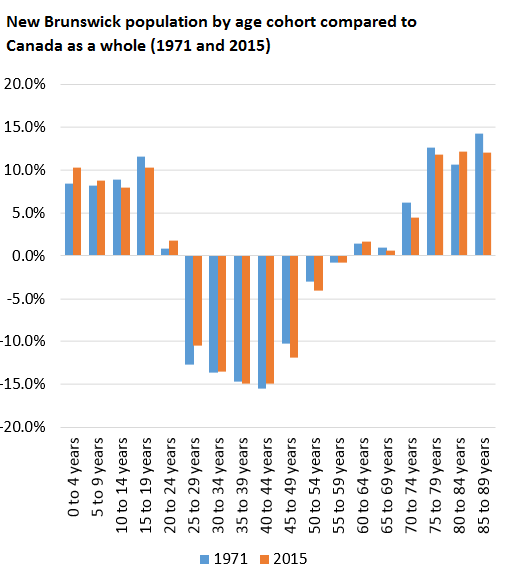 The reality is that this phenomenon is similar in other small provinces and U.S. states.  Small jurisdictions end up losing a lot of young people to the large urban centres.  The small jurisdictions – such as Manitoba and Saskatchewan – are those that are seeking a significant of inward migration to counter the outward effect.

That may seem counter-intuitive to some people. Why try to bring in younger immigrants when your young sons and daughters are leaving?  We have 40+ years of making that same argument.  We don’t need immigrants because we have youth out-migration.  How has that worked out so far?

As I have pointed out many times before – Toronto has a high net outward inter and intra provincial migration rate.  They make up for the loss with 95,000 mostly younger immigrants every year.

No matter how hard it is to get our heads around it is my view that a big boost in immigration should actual lead to more jobs for young, Canada born New Brunswickers.   Many of the new immigrants will fill positions that are not being filled now and that should boost output and create more jobs in the local economy.

You would think that 40 years of data would lead to a little new thinking.

2 thoughts on “New Brunswick’s missing 35 to 44 year olds: A lesson in demographics”