After a Davos conversation there have been a number of stories recently about which gender is most ask risk from the coming automated economy – driverless cars, robots, etc.  It’s an interesting conversation.  I took at look at the occupational differences between women and men in New Brunswick to add a little local context to this debate.  Most of the findings are not overly surprising but there are a few eyebrow raisers.

For a methodology, I took the share of employment for males and females and then compared the the two with male employment as the base (= 1.00).  Simply, anything less than 1.00 means that the female workforce has a lower share compared to men and anything above means they have a higher share.

The table below shows the highest level summary for the top level NOC codes 1-9.  As would be expected, females have fewer people in management relative to men (36% less) but they have 2.6 times as many working in business, finance and admin occupations.  There are 4.4 times as many females working in health occupations compared to men.  On the opposite end of the spectrum, there are 70% fewer females working in natural and applied sciences occupations, almost none in trades and transportation, very few in natural resources occupations and less than half – relatively speaking – in manufacturing occupations. 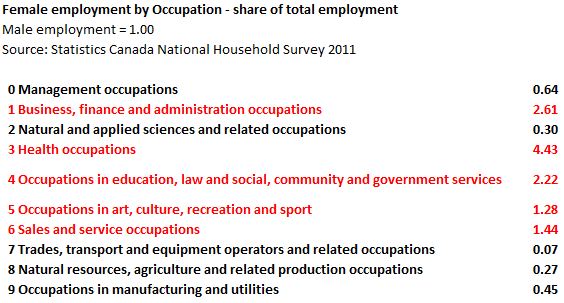 Females are more heavily employed in administrative occupations (three times as many compared to men).  The main outlier – there are 61 times as many females working as medical admin. assistants than men.

Women kick arse in health care – except for NOC 311 Physicians, dentists and veterinarians – where there are 27% fewer females than males.  However, there are 35% more female veterinarians, more optometrists, 73% more pharmacists, nearly six times as many females in therapy-based occupations, 5.5 times as many in med. tech occupations.

There are slightly fewer female university professors (21% fewer) but more college instructors (+27%).  There are more than 3 times as many teachers.

There are 22% fewer female lawyers compared to men and 70% fewer police officers.

There are 66% more female bartenders – who knew?

Here is the full review of 600+ occupations for New Brunswick.  Some interesting stuff in there.

I guess I don’t really address the subject of this blog but I’ll let you draw your own conclusions.

2 thoughts on “Are women or men more at risk from the coming automated economy?”