New Brunswick saw an uptick in job creation in the last few months on 2015 and an overall real GDP growth rate (the final number is not in) of likely something above one percent.  That may not seem like much but compared to the average rate of zero since 2008 that is a good step forward.

A lot of folks  – me included – now believe the labour market is becoming the biggest drag on GDP growth potential in New Brunswick.  As you can see from the chart below we are the only province in Canada that has seen its labour force shrink since 2008.  Across Canada the number of people working or looking for work has increased by 1.16 million people.  In New Brunswick, it has shrunk by 4,000. 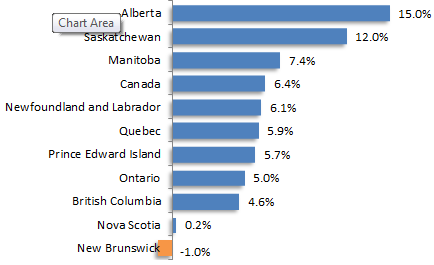 There is a fairly strong correlation actually between labour force growth since 2008 and GDP growth.  NB has faired the worst among the provinces.  Nova Scotia has been only a little better and PEI has actually had the best GDP growth rate among the four Atlantic Provinces along with its 5.7% increase in the labour force.

How do we grow the labour force?  Either by encouraging more NBers to join or by attracting folks from outside the province or country to come in.  The labour force participation rate (the percentage of adults that are either looking for work or working) has actually gone down from 2008 to 2015.  This is mostly a function of age.  Only 11 percent of folks over the age of 65 are in the labour market (participating) and while that is up from 6.5% in 2008 there is some question about how many more in this age group will join the labour market.

Among those in the prime age group 25-54, 87% are in the labour market (in 2015). There is not likely much more opportunity to expand that group.

Expanding the labour market will be very important if we are to get the economy moving in the right direction.

1 thought on “The size of NB’s workforce is smaller now than back in 2008. Only province to shrink.”