The Manitoba example is an interesting one for us to consider as we think more deeply about immigration and the labour market.  Even though Manitoba has no oil and gas industry and only a fairly small mining sector (less that 3% of total GDP) its economy grew robustly between 2006 and 2014.  Not to the level of Saskatchewan or Alberta mind you but still the size of the economy (real GDP) swelled by 20%.  New Brunswick, by contrast, saw its total economy grow by only 2% over the same period.

If you look at the ‘public sectors’ in comparison to overall GDP growth you see an interesting trend too.  Health care GDP and public administration GDP grew strongly in Manitoba but less than the rate of overall economic growth.  In New Brunswick, by contrast, health care GDP grew five times faster than overall GDP and public administration GDP grew six times. 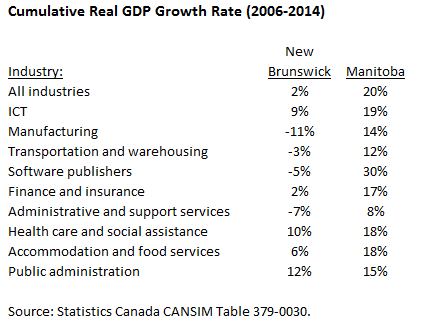 But what is really interesting is the correlation between growing industries and immigration.  Manitoba, a province only slightly larger than New Brunswick, attracted more than 8 times as many immigrants between 2001 and 2011 (defined as those living in the province in 2011 that arrived in Canada between 2001 and 2011).

But when it comes to the occupations that support export-oriented industries, the multiples go through the roof.  Of the more than 18,000 New Brunswickers who worked in manufacturing-related occupations (NOC 9) in 2011, only 175 were recent immigrants (0.9%).  In Manitoba, it was 5,515 (one in five of every workers).  Manitoba attracted 31.5 times as many workers in NOC 9 compared to New Brunswick over the period. 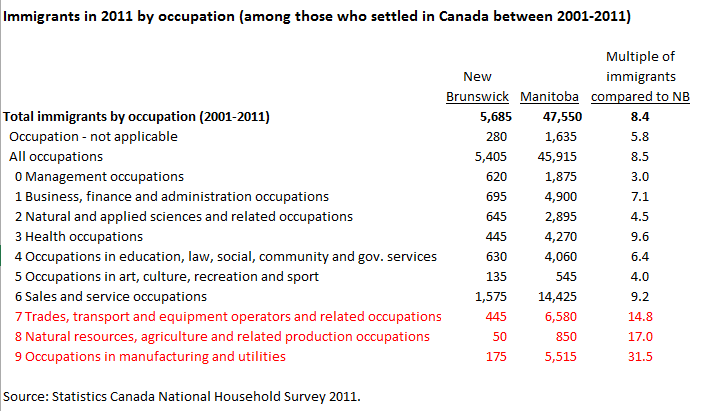 It’s clear that Manitoba has been attracting immigrants for years to support economic growth.