Below is the chart I used in my presentation earlier this week to make the case that we can’t use outward migration of New Brunswickers as a reason not to attract immigrants.  If you look at the number of people that move into Greater Toronto each year and subtract the number that leave – you get a negative 23,000 in an average year between 2002 and 2014 (a long sample size).  That is a negative inter and intraprovincial migration rate of 428 per 100,000 people living in the community

If you run the same numbers for New Brunswick over the same period you get a negative migration rate with the rest of Canada of 208 per 100,000.  On a net basis, Toronto loses twice as many people each year than New Brunswick to migration elsewhere in Canada.

You don’t hear Torontoians lamenting the loss of their young people to other jurisdictions.  There are no front page stories in the Globe and Mail of the tragedy of outward migration from Toronto.  No laments from the Mayor of Toronto.  No financial programs targeting young people to keep them at home.

Most people understand there are myriad of reasons why people move to and from Toronto.  Besides, over that same period, Toronto attracted an average of 92,500 immigrants per year – 4 times as many as were lost through interprovincial migration.  If New Brunswick had the same ratio of immigrant inflow to outward migration within Canada as Toronto, it would mean 6,300 immigrants flowing into New Brunswick per year.

I’m not suggesting we shouldn’t try and keep young people here.  I’m a big supporter of experiential learning, apprenticeships, co-op education and doing a better job of exposing New Brunswickers to the jobs available here and now in the province.  For example, I understand it is getting harder and harder to recruit loggers.  I suspect a lot of New Brunswickers might find that an interesting career if they gave it a long hard look.  You work in nature, earn good money and work hard for a living.  But I suspect there aren’t many guidance counselors pitching ‘logger’ to high school students.

But at the end of the day people are more mobile than ever before and I don’t think we should spend too much time lamenting their loss.  Many come back eventually and as I have said before many of the most interesting people I meet in New Brunswick have spend a large block of time outside the province (my colleague Susan Holt is a perfect example of this).

The overriding objective is to ensure there is enough labour to meet the demand in New Brunswick.  In the last week alone I have heard about a laundry service in Saint John, a manufacturer in northern NB, a firm looking to hire loggers in central NB and a restaurant in northwestern NB that all can’t find workers. 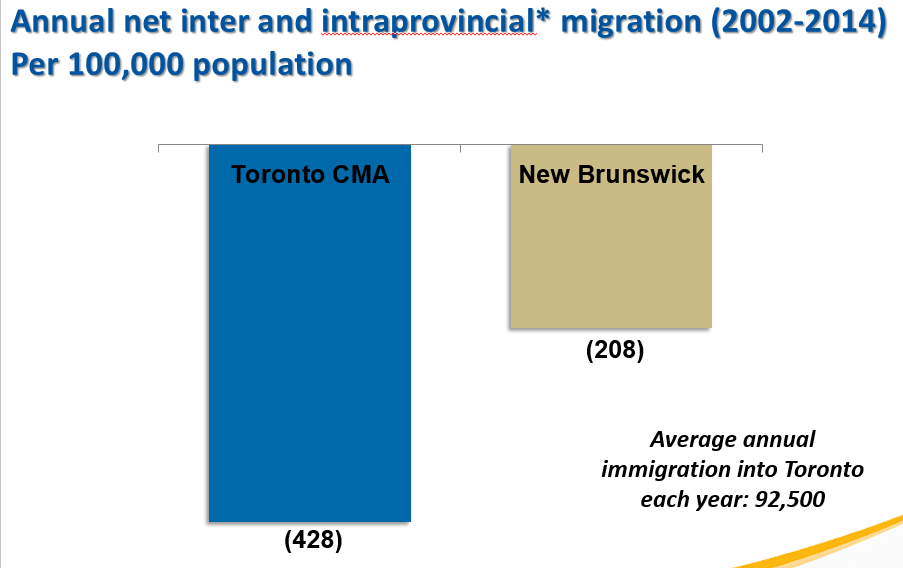