There was an interesting article in the Economist magazine this week about the rise of self-employment in Britain and the conclusion by economists that this is basically a bad thing. This runs somewhat counter to the “start-up” narrative that has become all the rage. We want people to “start their own businesses” but we think self-employment is a bad thing?

Of course these are two different concepts – in theory. The sexy start-up is an attempt to build a business based on a novel idea or niche market opportunity. Its goal is to create new wealth. Most self-employment is meant as a source of income and in many cases – think folks who sell stuff at the farmers’ markets – it is purposely meant to be a part time gig.

It is also important to point out the spreads between self-employment and wage income across Canada are similar to New Brunswick (64% in 2013) so this is not just New Brunswick – but on the surface it would seem the economists are right.

However, I think we need to reconsider ‘self-employment’ particularly as most economists are predicting a sharp rise in ‘contractor’ workers (think Uber and Shopify) in the coming year in line with the growing number of Internet-based work to worker matching services.
New Brunswick can sit back and do nothing or we can try and get in front of this thing to benefit New Brunswickers.

Since 2000, the number of persons reporting self-employment income in New Brunswick is actually down by six percent while rising by 12 percent across Canada. 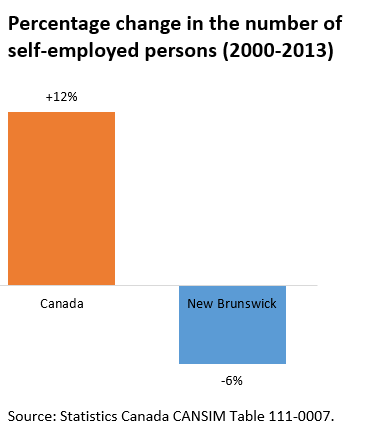 So here’s the deal. New Brunswick has pockets of high unemployment around the province and dozens of communities that desperately do not want their people to leave. Why can’t self-employment fill the gap? I’m not talking about self-employment based on local markets but based on external markets. There are dozens of firms right now looking for workers to do the job from home (or it could be from small office environments set up in small towns). These are mostly full time jobs and that offer fairly good wages (someone posted that the Shopify jobs are starting around $40,000/year).

It’s worth thinking about.

3 thoughts on “Is self-employment a bad thing or a potential boon for New Brunswick?”