I keep hearing folks ask the question “how come we need more immigrants when we have high unemployment and young people moving out west for jobs”?  The answer to this question is one of the keys to us getting our economy back on track.

Most of us will not remember the last time there was a real, sustained immigration wave into New Brunswick because it was around the middle of the 19th Century.  We had  a little spike right after WW2 as war brides were brought over and other immigrants were still trying to leave Europe.  But that quickly dropped down to levels well below the average for the country as a whole.  We had a little spike in immigration in the early 1970s (an average of nearly 2000 per year between 1972-1976) which worked out to a rate of approximately 250 per 100,000 population (still well below the country as a whole).  Then we dropped right back down to less than 100 immigrants per 100,000 and stayed there for more than 20 years – even as immigration into Canada remained at a steady and even growing pace by the 1990s. 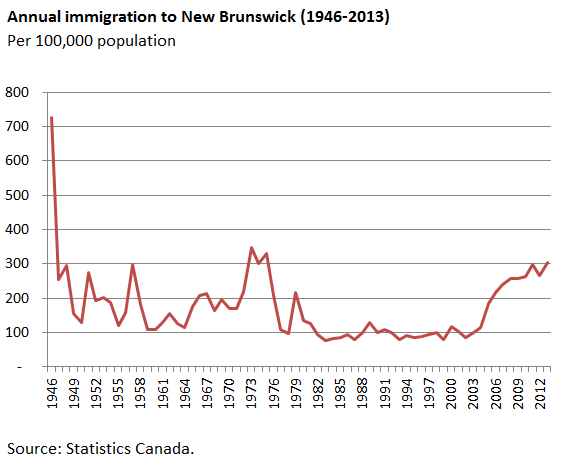 If you are of a certain age you may remember the product of that mini-wave in the early 1970s.  Some of those immigrants ended up working in government, some started successful businesses and others set up successful farming operations.

Now we had relatively high unemployment rates in the early 1970s.  We also had young people “goin’ down the road” to find work in Toronto.  We also had a wave of young people joining the workforce every year.  Yet we still allowed in immigrants and many of them stayed and are here today.

In 2015 we have relatively high unemployment (although low by the standards of the mid 1970s) and we have young people going down the road.  What we don’t have is a wave of young people joining the workforce every year.  In fact, the young workforce is shrinking and has been for years.

Labour and capital are the two main drivers of economic growth.   For most industries capital follows labour (think ICT). For a discrete number of industries labour follows capital (think Fort McMurray).   If you think about many of New Brunswick’s key industries – from sawmills to fish plants to manufacturing to contact centres – if the labour pool dries up – so will the capital.

So, immigration becomes key to our economic renewal.  Not necessarily Phds or highly skilled labour (although we will need some of that) – we need labour to fill the needs of industry – across the wage and skill spectrum.  And, by the way, not just to fill the needs of existing industry but we also want to grow the economy and employment base of the province.

The next time someone tells you we don’t need more immigration, you now have some food for thought.

2 thoughts on “Immigration as a driver of economic growth”