I had a good conversation with a policy guy before Christmas who advocates in favour of the feds tightening TFW and immigration to New Brunswick.  In his view, in conjunction with tightening EI access, this will force more seasonal workers into year round work and bring down the overall unemployment rate.

My counter-narrative is that the changes will lead to less business investment and eventual downsizing and/or closure of a number of export-oriented businesses that rely on production wage levels under $16/hour.

His response was “good riddance”.  We have spent too much time propping up low wage industries in New Brunswick.

I really struggle with this issue.  Should the government be clamping down on firm efforts to bring in workers from outside New Brunswick if it hurts their ability to survive in the province?  Politicians always talk about not picking winners and losers but are they not doing the same thing with immigration policy?

Over 50% of all workers in the Toronto manufacturing sector are first generation immigrants.  In New Brunswick it is less than 4%.  If firms cannot recruit locally, why not let them bring in foreign workers?

The policy guy told me that manufacturers will have to up their wage rates to attract NBers to work in the jobs and that “is a very good thing”.  Again, fine for the petri dish but wrong in the real world.  A guy who owns a manufacturing facility in New Brunswick and one in Ontario recently told me it is easier to recruit workers in Ontario than NB – at the exact same wage level and so they are ramping up Ontario.  The kicker?  The Ontario workers are mostly new immigrants.

We live in a world where borders matter less and less for trade, capital and knowledge flows.  If we decide to tighten up even more on the inward labour flow – how does that benefit New Brunswick?  We certainly are not tightening up on the outward labour flow….. 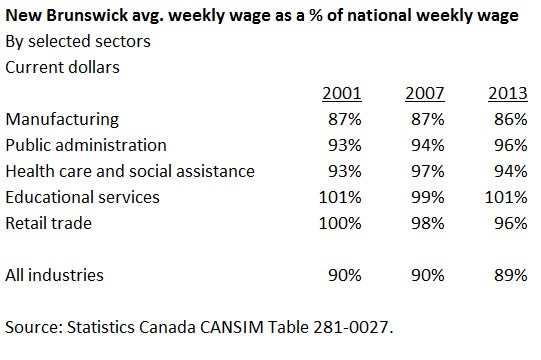 2 thoughts on “Should government decide which industries win or lose?”