Believe it or not I continue to have a hard time convincing some influential people that we have a serious and growing labour shortage problem.  They will say what about the 10 percent unemployment rate?  What about the fact we are still losing people to other provinces through interprovincial migration?  How about the crippling youth unemployment rate?

The youth unemployment is a concern to be sure but even that needs to be put into perspective. The unemployment rate is highest among the 15-19 age cohort and those young people are either in school and/or living at home.  Further, as shown below the absolute number of unemployed young people aged 15-19 continues to fall.  It was an estimated 4,700 in 2010 and now it is 4,300.  That is across the province.  If we had that data by region there would likely be under a 1,000 unemployed in the entire Greater Moncton region, for example.  Not the labour market apocalypse that some might tell you. 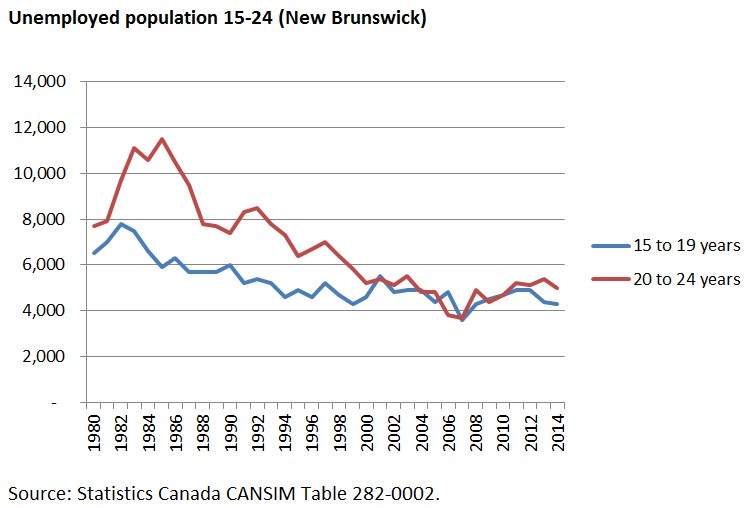 If we step back from the short term challenge (and the new one relating to returning migrant workers from Alberta) and look at the ‘big picture’ we see a fundamental shift in the labour market.  If you look at the following chart and overlaid a real GDP growth chart you would see GDP growth starts to collapse right about the same time as the lines cross in this chart.  Yes there was considerable government stimulus funding that gave GDP a little shot in the arm and yes we still had the hangover from a few of the major investment projects but strip that out and there seems to be a correlation between the tightening labour market and GDP stagnation.

In the early 1970s there were in the 140,000+ range of people aged 10-19.  The bulk of these people would be heading into the labour market over the coming 10 years.  At the same time there were only 50,000+ aged 55-64 and presumably mostly leaving the labour market over the coming ten years.  Even in the late 1980s there was a surplus of more than 55,000 using this measure.  The lines crossed in 2007 and by 2014 there only 700 people aged 10-19 for every 1000 people aged 55-64.  In other words, without inward migration we don’t have enough people even to replace existing jobs.  Now, of course, labour markets are organic and adjust in many ways.  Some people may retire late.  Some employers may not replace workers as they retire.  Some young people will continue to leave.  But the underlying trend is a ticking time bomb holding back GDP growth and stagnating the tax base on which government extracts the money it needs to pay for public services. 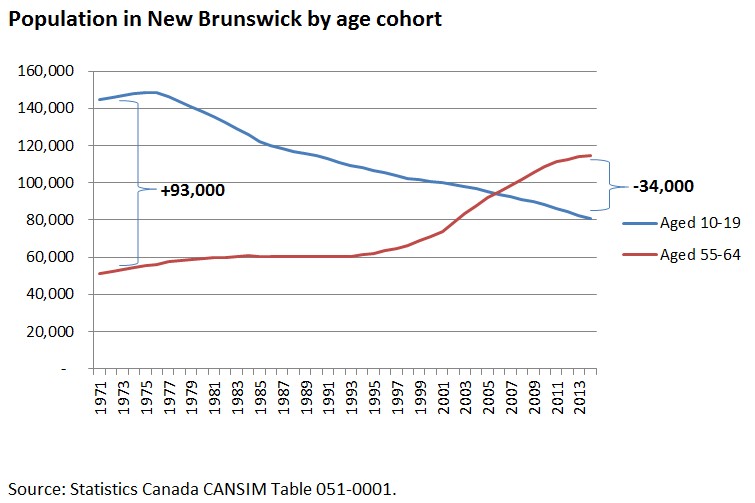 I think this and the calcifying attitudes towards economic development are the two biggest challenges facing New Brunswick – even more than the public finances.