It is interesting to look at the employment trend by sector in New Brunswick over the past decade as it does put things into perspective.  On a seasonally adjusted basis, in September 2004 New Brunswick had 352,600 people working.  In September 2014, there were an estimated 354,100 working – or a difference of +0.4 percent (rounded down in the table).  Nationally, the economy added 1.95 million jobs over the 10-year period.

The table below shows the sectors that added and those that lost employment over the period.  This is from the LFS so the aggregation is quite high but it does provide a high level snapshot of what has been going on.  NB’s agriculture sector is quite small relative to the country as a whole – still it has shed 46% of total employment over a decade – or about 3,200 workers. Manufacturing has dropped about 30% of its workforce.

I have been warning about transportation and distribution for years but I can’t seem to get any kind of good answer as to why this sector has shed nearly 5,000 jobs over the decade. The big jump in public administration employment is strange.  Maybe some kind of anomaly in the data as it is showing 3,500 more workers in Sept 2014 than just one year ago back in Sept 2013.  September 2009 was actually the high watermark for Septembers – there were an estimated 27,200 workers in public admin in that month – just slightly below the 27,000 in Sept. 2014.

Look at health care and education employment.  Those two sectors combined across Canada have accounted for 776,000 new jobs.  In New Brunswick, 4,300 net new jobs (0.55% of the national total).  Now, these sectors tend to track overall population growth (which is virtually zero in NB and robust across Canada) but it is a reminder that so much of the service sector (and construction) is reactive to overall population growth.

Other than public admin, NB saw employment growth in the utilities sector rise faster than the country as a whole as well as the info, culture and recreation sector. 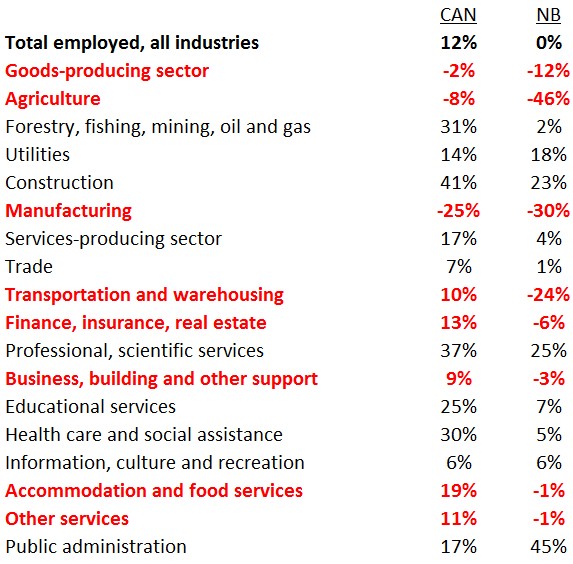 1 thought on “Ten-year NB employment growth by sector. You might be surprised….”