The teeny bopper movie that was so popular a few years ago called High School Musical featured a catchy song called “We’re all in this together”.  This could be the theme song for New Brunswick and Nova Scotia.  The chart below shows employment growth in the two provinces from September 2005 to September 2014 (on a seasonally adjusted basis).  I show it as an index but it really means Alberta’s employment has grown by 25% and Nova Scotia by 2%.  An index allows me to display my economic bona fides.

The two provinces have witnessed virtually no employment growth over the nine year period. Note that PEI has started to pull away from NS and NB.  The Island is by no means booming but a strong focus on immigration and the growth of a few key sectors such as biosciences is showing up in the numbers. 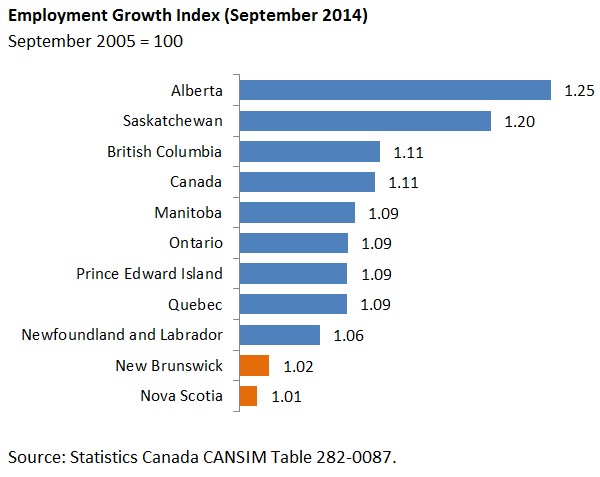 The interesting thing to me is that this doesn’t seem to bother a lot of folks and, in fact, I get emails suggested we should “get used to it” and it is the “new normal” and even “it’s a good thing”.

Maybe.  I don’t claim to have all the answers but I see a long, difficult period ahead for this province if we don’t get population and employment growth back to at least a moderate growth position.

2 thoughts on “NB and NS: We’re all in this together (employment stagnation)”