Skip to content
August 22, 2014 David Campbell Post in Uncategorized
An organization called Resource Works tweeted today the image below.  I thought I would post it as an example of what not to do when messaging the economic value of a sector such as forest products.  The graphic says “Last year, the forestry sector contributed $5.9 billion to BC’s GDP.”  “That is equivalent to the salaries of 54,000 family doctors.”
Trouble is that doctors don’t get paid with GDP, they get paid with tax dollars.  This seems to be a way to take advantage of peoples’ lack of understanding (what is GDP).  This would be much more powerful if it was tied to tax dollars.  “Last year the forestry sector contributed over one billion dollars in taxes and royalties – which is enough to pay for the salaries of 9,000 family doctors”. Sure 9,000 is a much smaller number than 54,000 but if we want to have an honest conversation about the value of key industries we shouldn’t try and hoodwink people.
Saying that $5.9 billion is the same as 54,000 doctors is the same as saying $5.9 billion is equivalent to 15% of the provincial government revenues – loosely implying that the $5.9 billion is government revenue. It implies something that isn’t true. 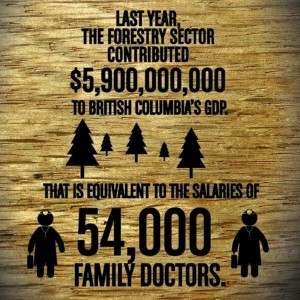