In the wake of the announcement this week that the Nova Scotia government deficit had increased to nearly $700 million, pundits decried the out of control public spending and demanded the government tighten its belt.  “We can’t afford it” was the common refrain.

Back in the early 1980s, NS had program spending relative to GDP higher than today but not by much. 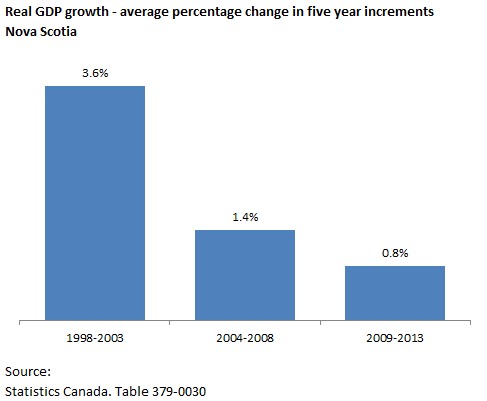 What if Nova Scotia’s economic growth had risen from 2004 to 2013 at the same rate as 1998-2003?  The province’s GDP would be more than $3.3 billion larger.  The Nova Scotia government raises about $6 billion worth of own-source revenue or roughly 18% of GDP.  So if we assume it would take 18% off that $3.3 billion that would mean an additional $595 million in revenue each year and presto your deficit is all but eliminated.

Now I realize that it is not this simple.  That $3.3 billion worth of GDP growth would have likely led to higher public services and infrastructure costs.  But the point is a real one.  Government’s have three ways to remain fiscally solvent: 1) raise taxes, 2) moderate or cut spending or 3) benefit from moderate to robust economic growth.

I suspect there is some room to cut public spending but not by hundreds and hundreds of millions of dollars.  Nova Scotia is a highly rural and aging population.  The cost to maintain infrastructure and offer decent health care in such a province makes it difficult for me to believe that the answer to the big deficit can be found in cuts.

I would argue the NS government has limited room to move on the raising taxes front.  It has the highest sales tax in the country.  It has the second highest personal income tax burden in the country for folks earning $50K and up (see here) and it has fairly onerous gas and other taxes.  As I stated above, provincial own source revenue is running around 18% of GDP, throw in the feds and local government and the total tax take out of NS – all sources – is likely well above 30% of GDP – not much room to move there.

Unless the GDP grows.  Then the government gets a natural tax boost.

So, in reality the NS government can’t grow its way in the short term out of a $700 million deficit – unless big new offshore gas and oil fields are discovered over night  – but in the long term – spending control – below the rate of annual inflation – coupled with a moderate to robust economic growth rate would put the province on a path to fiscal stability within a reasonable timeframe.

The problem is that Nova Scotians increasingly don’t seem to want economic growth.  They will tell pollsters that jobs and the economy should be priorities but when you scratch below the surface they don’t want to develop their onshore natural gas industry, they don’t like aquaculture, they are against increasing immigration and – following Anne Murray – they don’t want those cursed windmills blocking their view.  All of these opportunities – with the possible exception of the bane of Anne Murray – could bring a hefty boost to GDP.

Immigrants – if attached to economic opportunity – could provide a major boost to GDP.  The provincial economy is something like 60% local consumption – which is driven by population growth.   But CRA’s polling suggests NSians don’t want more immigrants (above the current very modest level).  The Ivany report, thank goodness, called for a big boost in immigration.

We need to be able to have a more intelligent conversation about natural resources development.  Aquaculture is becoming one of the most important sources of food protein needed to feed the world.  It is key to ensuring we don’t wipe out wild fish stocks.  Sure there are challenges but there are challenges with all agriculture, fisheries and other sources of food supply.  We have to figure out how to develop an aquaculture industry safely and to the benefit of Nova Scotians.

Same with natural gas development or any other natural resource development.

I suggest we change the standard. Right now the standard seems to be do nothing in Nova Scotia that brings any kind of risk.

I suggest we change it to “if other jurisdictions in North America – BC, Alberta, Oregon, North Dakota, etc. can develop these industries – with broad public approval – the burden of proof should be on those to show why these industries can’t be safely developed here”.

If we were talking about developing industries that were very controversial and very few jurisdictions in North America were interested, then I say NS should say no.  But this is not the case.  Cripes, Saskatchewan has a multi-billion dollar uranium mining industry and the Premier wants to double its size to sell into Europe.  They would run the Premier of NS out of town with pitchforks if he proposed a uranium mining industry in Nova Scotia.

Of course, there is certainly potential for more urban, export-oriented services growth.  If HRM grew by 5% per year, it would offset much of the decline elsewhere but this would exacerbate the already significant tension between HRM and the rest of the province.

But the bottom line is this. Nova Scotia, like New Brunswick, PEI, etc. is aging rapidly.  By definition the tens of thousands of NSians that have migrated out of the province in recent years were more risk tolerant than those that remain.  It takes some hutzpah to uproot yourself and your family to move away.  Increasingly those that remain – particularly outside the urban areas – are either retired or approaching retirement and don’t really want growth at all.  They don’t want to be bothered.  They want to retire and “be left alone” as one person put it when asked by a journalist in New Brunswick.

I think the number one challenge for the Premier and government is this attitude.  I think he should spend as much time as possible trying to convince Nova Scotians about the importance of economic growth to ensure the province can afford public services and infrastructure spending in the future.

He should engage every possible intermediary – anyone or group with influence from preachers and priests to local chambers of commerce to become champions of economic growth.  To embrace immigration.  To encourage responsible development of resources.  To create a new, confident attitude that fosters more ambitious entrepreneurship.

The alternative is continued malaise – more hat in hand to the federal government – more chipping away at services.   I’m not sure that Nova Scotians want to spend the next 10-20 years in a constant austerity struggle and caught in a negativity trap.  I believe most of them would love to realize the ambition of the Ivany Report.  However, it is going to take an ambitious ground game in local communities all over the province to change attitudes.

Imagine if you could harness just 10% of the passion aroused by fracking towards a drive for economic renewal across the province.  Imagine if instead of frack off signs all over the place there were “we want economic growth” signs or “we are ambitious” or “immigrants welcome”.

1 thought on “Does Nova Scotia have a public spending problem or a growth problem?”