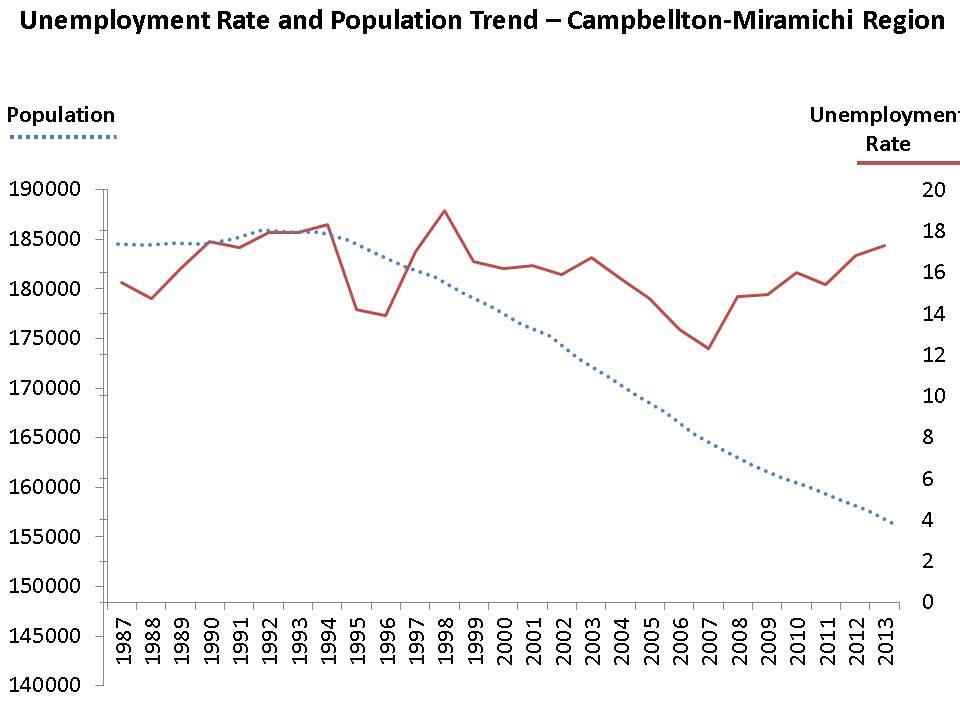 One of the more interesting conversations I’ve had occurred with a senior government policy wonk more than a decade ago around the time of the big mill closures in the Miramichi.  One of Premier Lord’s advisors at the time told me he was convinced the problem with the Miramichi and Northern New Brunswick was too many people.  If we just let or nudge folks to leave the region for jobs elsewhere, the economy and labour market would equilibrate around a smaller population.  The unemployment rate would go down and the economy would be stronger (and smaller).

He was channelling some research out of an Ottawa think tank that had come to the same conclusion and had recommended government pay people to move away from areas with high unemployment to jobs in areas with low unemployment.

Even back then I was skeptical of this as policy (even as de facto policy) as the bulk of any economy is actually local spending.  If you reduce the size of the population you could end up exacerbating the problem.

We have some data to back up my position.   As you can see in the chart above, the population in the Campbellton-Miramichi region has decline steadily since around 1990 and it only accelerated after my conversation with the wonk.  However, the unemployment rate, while dipping a bit around 2006-2008 timeframe, has remained essentially the same.  It was 16.3% when I had the conversation with the wonk and it is now 17.3 percent (at the end of 2013) – it is actually on an upward trajectory again.

And the further truth is that Alberta oil employment income is keeping things from getting worse.  Tens of millions worth of migrant labour income flows into the region propping up the fragile economic base.

To recap, since we had our little chat, the population has declined by some 20,000 people and the unemployment rate has remained the same.

What does this mean?

Folks who read this blog will know I am a fan of labour mobility as it is part of a healthy economy over time.  The free movement of labour is a good thing but only to rebalance labour markets in the short term.  A long term, structural outward migration of labour leads to chronic economic underperformance that is very hard to break.

As I told the wonk more than a decade ago, the solution in Miramichi-Campbellton – if we view the solution as a strong regional economy with a low unemployment rate and a solid employment rate – must be based on economic development – attracting more investment, entrepreneurs, anchor natural resources-based employers, etc.

Although in the end he may win the battle.  Most of the outward migration is among young people leaving the Miramichi-Campbellton region with a rapidly aging population.  The unemployment rate may end up declining naturally as a result of this effect – assuming they don’t all leave the region.  We will be left with a  service economy with lots of home care workers – heavily reliant on retirement income coming in from government outside the region.

Not a particularly good vision for the region.