The following table shows the net migration from Atlantic Canada to the rest of Canada over the past 40 years.  We are interested in the net numbers (out vs. in) because that is the net loss/gain from migration.  There were actually a couple of spikes in the early 1970s and early 1980s where more people were moving in from other parts of Canada than moving out but since 1984 the trend was negative every year until 2009.

Interestingly, immigration (different than the migration chart below which is interprovincial) also picked up in the early 1970s and now again in the late 2000s.

I argue that given the wave of Boomers who are starting to retire and are about to retire, we need a massive influx of young migrants/immigrants over the next decade and more.  In the last 10 years, the population aged 65 and older in New Brunswick rose by about 20,000 people.  In the next decade, it will rise by something like 58,000 people. 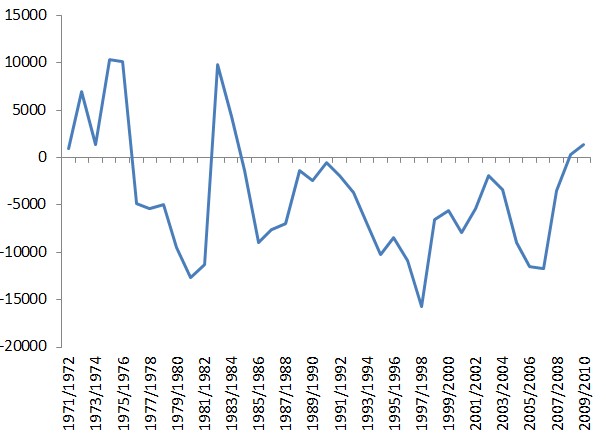 *There was migration between the four Atlantic Provinces but on a net basis this shows how many moved out of the region to other provinces in Canada.