For my loyal fans, I present to you the Moncton edition of Nothing but Net.

As might be expected Moncton saw less ‘destruction’ and more ‘creation’ compared to Saint John in the 1996 to 2006 period but you have to remember that much of the creation is influenced by the destruction.  If you lose jobs in manufacturing, for example, that cuts down consumer spending and lowers a whack of service jobs too.

Moncton saw the final purging of its railway history – with lots of jobs disappearing related to the CN Shops.  It also saw a structural shift in the number of secretaries as they migrated to call centres and were not replaced.   Don’t ask me why nannies and babysitters took a hit.  I have said for a while that Moncton’s wholesale sector has been in decline while it has been growing in Halifax.   Not sure anyone at city hall or anywhere else noticed.  You see that trend in the numbers here.

On the winning side of the ledger, call centres, IT, – some trucking occupation expansion – no doubt led by Mr. Armour and his related companies.   Insurance jobs in Moncton which have taken off in recent years – show signs of growth between 1996 and 2006. 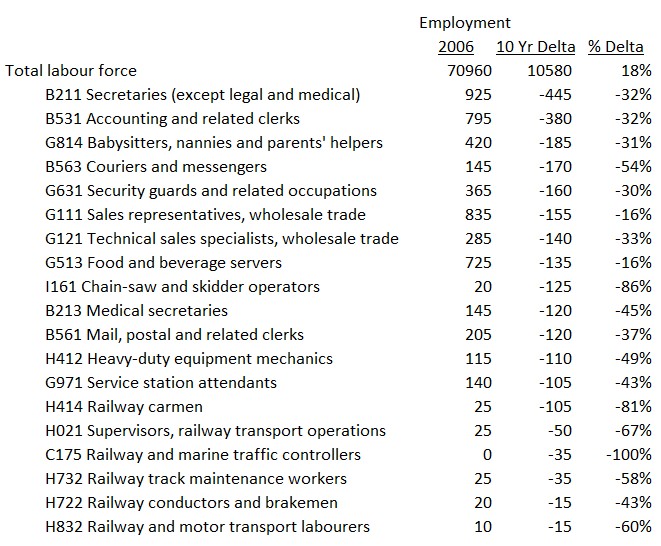