I was reading a story in the TJ this morning and the journalist had put “no new job creation since 2007”.   What she should have put was ‘net new job creation’.  I suspect most people realize this without thinking about it but it is an important distinction.  In any given year there are a pile of jobs that disappear and an other pile that are created (i.e. jobs lost at one firm and gained at another) but what we are tracking at this level is the net number.

But when we drill into the creative destruction – jobs going away versus jobs starting – you can get a very interesting picture of the structural shifts in the economic base of a jurisdiction.

The following chart shows a few of the occupations that shed jobs and a few that gained jobs over the decade.  The economy lost hundreds of jobs in blue collar occupations (and hairstylists for some reason) but added several thousand in IT and call centre jobs.    As with other cities, some of the call centre activity stole workers from the secretarial pool – and those jobs were not made up.  There were 500 less secretaries in Saint John in 2006 compared to 19996.  There seems to have been a shifting out of lower end finance occupations (SOC B53) and into higher end ones (B01).

If you add up all the gaining SOC codes and all the declining SOC codes you get the following graph.  The gaining occupations (IT, customer contact centres, health, financial) added 13,700 (on a base, by the way of only 64,000 total jobs in the economy) and the decliners lost 9,455.

That is why that little three letter word ‘net’ matters.

By the way, because I like you so much I have created a PDF table of every single three digit SOC for the Saint John area and its 10 year employment shift and put it here.   You will note that travel counsellors is one of the fastest growing occupations in Saint John. I’ll let someone down there figure out why.

PS – enjoy this kind of data while you can.  The scrapping of the long form is going to make these kinds of Census to Census comparisons very difficult (required vs. opt in data). 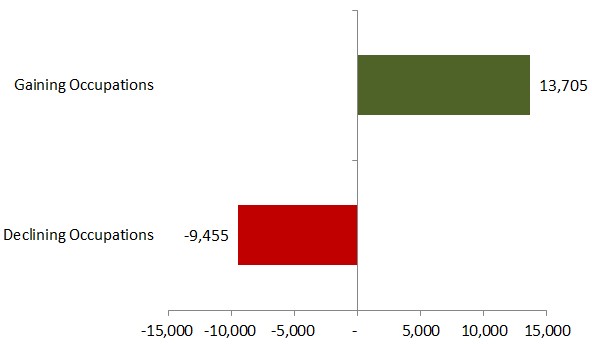 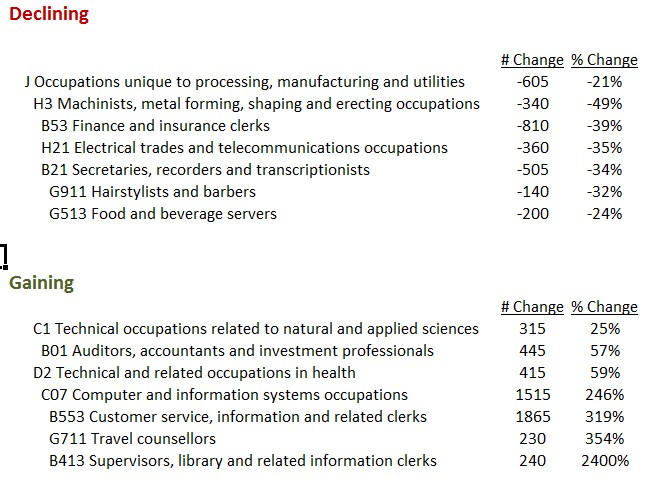