New Brunswick added jobs in September for the second straight month but to put things in perspective you will see in the chart below (prepared by Service Canada) that year over year employment is still down.    To put this into more perspective, there were an estimated 353,000 people working in September 2011 compared to 358,700 in September 2007.  In other words, no net new employment growth (year over year, seasonally adjusted)  in four years.

The other problem is that the public sector is still growing.  Public administration employment is down by 2,000 year over year but health care and education sectors (mostly publicly funded) are up by 4,000 year over year.

I expect health care jobs will continue to grow at a moderate pace.  There are hard demographic and population health issues at work here.  They may be able to curb the growth in employment but not overall growth.  As for education, we have seen a 49,000 person drop in the age group between 5 and 24 – the prime age for education.  So I think it is inevitable that we will see retrenchment here in the coming years. 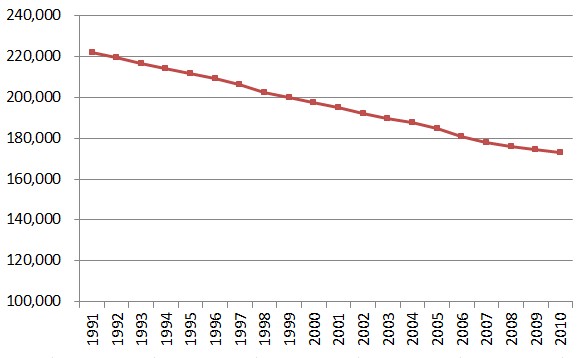 But my green shoots comment is related to the fact that the government did cut several hundred million out of spending this year and we didn’t fall off a cliff.

We still don’t know what is happening to the call centre sector.  We are losing some jobs there to be sure.  Is it at some bottom or will it continue to decline?

The overall challenge is still to understand where the next round of growth will come from.