I received an email this morning suggesting I shouldn’t be telling people when they should and shouldn’t retire.  This is in reference to my column in the TJ this morning.  For some reason the Web version is quite a bit shorter than the one I submitted so there are missing points.

But the main point is that New Brunswick has about the same level of employment in the 25 to 50ish age group as most other provinces but for some reason when we get into the later 50s, our employment rate – relative to the rest of Canada starts to plummet.  The following chart shows the difference in the employment rate between NB and Saskatchewan by age group.   You can see that in the early working years (with the exception of very young workers), the employment rate spread between the two jurisdictions is relatively small but when you get in the 55+ age groups, it starts to blow out.  There are 40 percent more people working in the 60-64 age group in Saskatchewan compared to New Brunswick. 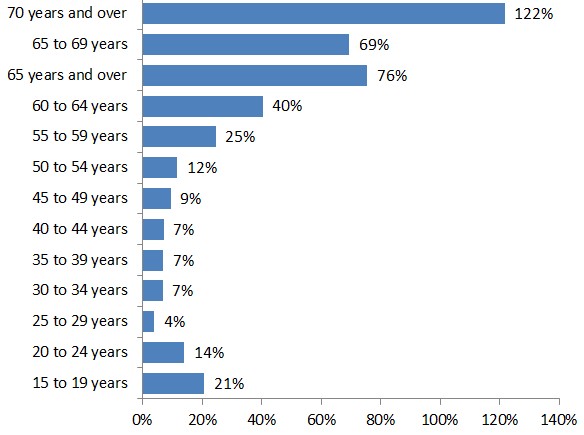 This is not about Saskatchewan.  I see no practical reason why there are over 90% more people working in the 40-44 age cohort in New Brunswick compared to the 60-64 age cohort.

I don’t know if it made it into the published column, but I was clear that I am not saying people should be forced to work into old age nor am I trying to preach to people who want to retire early.  I am saying that as a society we need to rethink are approach to work and retirement and there are good economic reasons to do so (read the piece).

When 65 became the standard retirement age in New Brunswick the average life expectancy at birth for men was 66 years of age.  Now it is 78.