One of the frustrating things about the Labour Force Survey is that while we can be comfortable with the data (the survey methodology is strong) we can only speculate as to why a trend may be occurring.

But the number of people working for themselves but with no employees is up strongly (12% growth in the past 7 years compared to only 2% for all employment) in New Brunswick while self-employed persons claiming to have ‘paid help’ (employees) is down by 11% over the same period.  There is a similar trend nationally with a strong upswing in those working for themselves but with no employees (13% growth) while those with paid help have not grown at all.

It’s tempting to blame the recession for some of this trend.  Microbusinesses that may have had one or two employees may have laid them off and are now just small biz owners working for themselves.  But the tipping point in New Brunswick was around 2002-2004 when the number of self-employed persons with paid help peaked at over 18,000.  There were also changes to the small business tax rates in the early 2000s which might tempt us to think they led to micro businesses taking on new employees but the only source we have – the LFS – shows us that total employment among enterprises with less than 20 employees actually went down from 111,000 in 2000 to 109,000 in 2003.  This is not a particularly good measure as 55% of NB businesses have less than five employees (so the less than 20 measure is not particularly helpful). 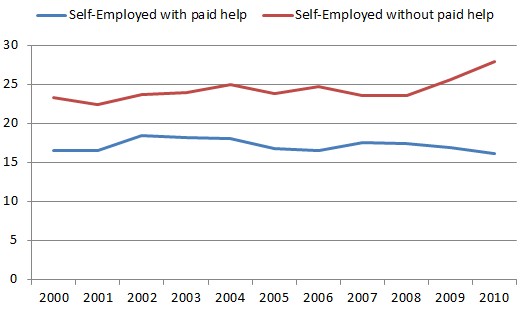 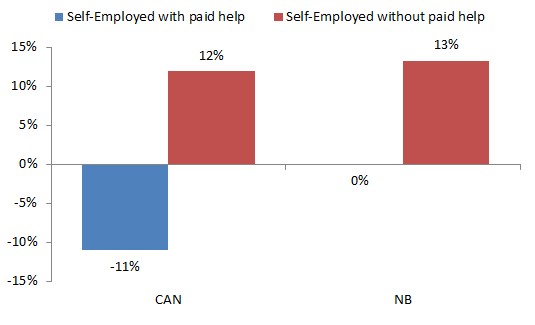