Once in a while you come across a statistic that is so mind boggling your first thought is that it must be an error in the data.  I was look at the business support services sector employment data in New Brunswick and Nova Scotia today and I thought I was seeing things. It is important to point out that this sector includes (NAICS – 56142 Telephone Call Centres).

It turns out in 2003 there were nearly 16,000 persons employed in this sector in New Brunswick (this is overwhelmingly call centre jobs).  Since then, there has been a steady and somewhat steep decline down to 8,600 jobs (net loss of 7,300 jobs between 2003 and 2010).  Even more astoundingly, employment in Nova Scotia is going up over the same period by almost 4,000 jobs.

This is counter intuitive on many levels.  The NB numbers are possible because we did see downsizing with ICT, Sykes, Minacs, etc. around the province.  I wouldn’t have thought it was 7,300 jobs, though.  In Nova Scotia, there have been a similar number of closures and downsizes (in the press at least).  The Convergys downsizing is the most obvious of these. 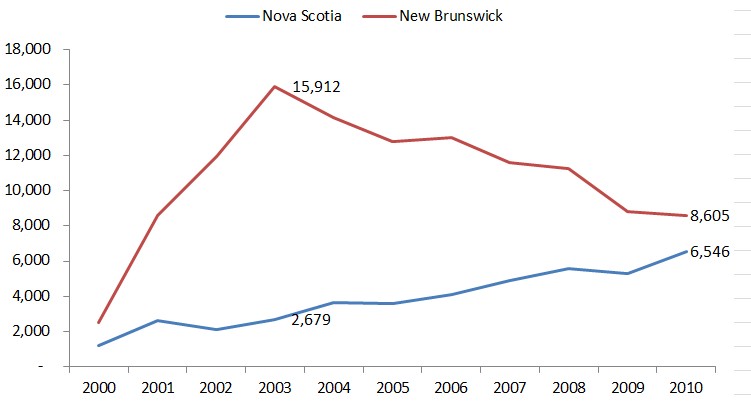 There are a few potential and partial explanations but before I get to those, there is a big caveat.  Some of the call centre jobs in New Brunswick do not show up in NAICS 56142.  It’s not 100 percent clear to me how Statistics Canada classifies these jobs (from the Survey of Employment, Payrolls and Hours) so I suspect that some of them are actually showing up in financial services and other sectors but still 16,000 jobs in 2003 – that would have been an awful lot of call centre jobs.

Potential points of interest.  First, there are other industry groups under NACIS 5614 including:

Statistics Canada does not publish five digit NAICS employment from this survey.  From the Census we know there are a couple of thousand people working in these other groups.  They could have shed employment since 2003 in NB but it would not have come close to accounting for this large swing.

Second, it is possible that Statistics Canada might have made some coding changes (I admit this is a stretch to any economists out there). For example, if you had put the Royal Bank call centre in the banking sector in 2003 but later on put them in NAICS 56142 that could account for some of the swing in New Brunswick.  Most of the call centres in New Brunswick are not ‘outsourcing’ call centre work – they are internal to firms – Royal Bank, Xerox, Purolator Courier, Exxon/Mobil, CIBC, etc.  I am not sure where they are showing up.  The SEPH survey is a survey of businesses (the labour force survey is a survey of individuals).

But neither one of these really explains the rise in Nova Scotia jobs in this sector.

I guess we will have to wait for the Census data (probably more than a year away from publication) to really understand what is going on here.  The call centre industry associations might be able to explain this but it is certainly baffling to me.