Doing a little more research on this issue of Maritime Union, I wanted to know how much affinity New Brunswickers have with the concept of New Brunswick.  Because of a lack of immigration, New Brunswickers have the second highest percentage of third generation (or more) Canadians.  Just under 90% of us belong to families that have been here at least three generations (it is 60.5% across Canada and well below that in Ontario).  Does that give us a stronger affinity to provincial identity? 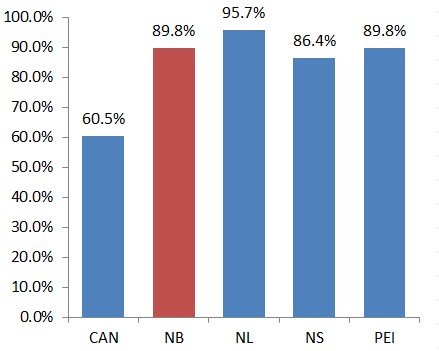 Not necessarily.  The Association for Canadian Studies in Montreal did a survey in 2009 where people were asked to define themselves relative to national versus provincial identity.  While the data was not broken out for New Brunswick, Atlantic Canadians were 80 percent more likely to define themselves as ‘Canadian first but also New Brunswicker’ compared to the national average.  At the same time, only Quebeckers had less identification as ‘Canadian only’ among the regions in the study (and only Quebeckers had a higher ‘Quebec first, then Canadian’ (by a wide margin) than Atlantic Canadians.  No Atlantic Canadians (0 percent) identified themselves as ‘New Brunswicker’ only.

For this one study, at least, it would seem that Atlantic Canadians see themselves primarily as Canadian but still have a strong sense of provincial identification.

I find the identity stuff fascinating.  Some people are deeply wedded to ‘place’ and others could care less.   Most of us are somewhere in between.

Certainly if we are to start talking about Maritime Union, we will have to create a new level of affinity – to the ‘Maritimes’.

I have said it many times before – the political and business ties among the Maritimes are not nearly as strong as you might expect.  I have talked with many businessmen/women from NB who say it is harder to do business in Nova Scotia (for example) than in Ontario.  We have a historical relationship but also a ‘beggar thy neighbour’ relationship.    Instead of celebrating when another Maritime province enjoys some success, we resent it (we in the generic sense).    Misery loves company.

It could be done.  We could become ‘Maritimers’.  I just don’t think people are up for even micro changes these days – think about the furor over the sale of NB Power (a tiny issue in the overall scheme) or shale gas (SWN wasn’t even drilling – they were doing seismic testing) or municipal reform (the outrage in Gagetown that it might be forced into the embrace of Freddy Beach).  Something far more grand – Maritime Union – would take a level of good will, cooperation and public discourse that we haven’t seen.

In the end, I think the better course of action is for New Brunswick to get its act together.  To address municipal reform.  To foster growth sectors (responsibly in the case of natural resources).  To develop a sustainable trajectory for  public finances.  To bend the cost curve on public health spending (public – I reiterate – if the Boomers I see driving around Moncton in their Lexus’, Mercedes, Caddies, etc. want to pay copious amounts of their stored wealth on health care – like the Yanks – I say fill your boots – but to expect the Hyundai driving Gen Xers to foot the bill indefinitely is not realistic).

If we build a sustainable province here – then Maritime Union could be a longer term option.