It seems economists are befuddled as to why we can have high unemployment and rising wages.   This doesn’t fit the standard models – weak labour markets = less upward pressure on wages.

What amazes me is that we can have a discussion with multiple economists and labour market types and the following data is not mentioned.  A main reason New Brunswick has upward pressure on wages and a weak labour market is that a large segment of the population is not really interested in work (at least year round).  There were 109,000 persons in NB that collected EI income in 2009 and 396,000 that earned wages/salaries/commission income.  The ratio of EI collectors to wage income earners in Moncton and SJ was about the same as the rest of Canada.   Back those two areas out and for every wage/salary earner there is one EI collector (one in three) – this is 85,000 people* collecting EI outside of SJ and Moncton.

We don’t have the Freddy Beach data but it is likely lower than Moncton and Saint John which could push this ratio in the rest of NB to 40 percent or higher.

If the economists actually asked employers in rural and smaller communities in NB they would hear this story.  There is a large segment that won’t work year round.  Now there is one caveat here – as was sternly pointed out to me recently – if this cohort (the 85k) was offered $20/hour or more many would likely switch to year round work.

*Please note that a few thousand of these would be parental leave. 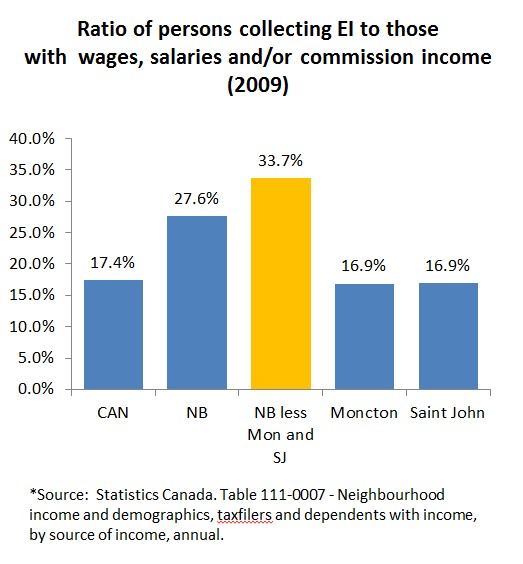 3 thoughts on “The new normal in labour markets”