I think New Brunswick needs to apply this thinking to our exports and economic activity measurement.  Every year we get forecasts from economists telling us whether our economy is going to move up or down and usually they will talk about the ‘strength of manufacturing‘ or lack thereof.  But the truth is that the Irving refinery and, secondarily, the few pulp & paper mills so overwhelm the statistics it is hard to get a sense of the ‘core’ economic activity.   Wood, paper and petroleum (basically a handful of firms) make up 76% of the value of all exports from New Brunswick up from 68% before the refinery expansion.  Since wood and paper exports have declined since 2001, this is really about the refinery which has grown from 39% to 64% of the value of total NB exports since 2001. 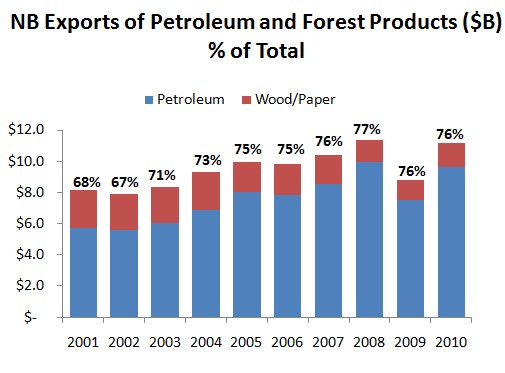 What this means is that all other exports have remained essentially flat (in total value) over a 10 year period.

I am not underplaying the importance of petroleum or wood/paper.  But it matters if you are thinking about economic impact.  The incremental economic impact from another billion in exports from the Irving refinery is marginal while another billion worth of exports from other manufacturing sectors could generate up to 35,000 more jobs in New Brunswick.  Yes, for fairly labour intensive manufacturing, each billion in exports is said to support some 35,000 jobs.    Forest products manufacturing has a strong employment multiplier.  For every billion in exports, upwards of 10,000 in jobs are supported in New Brunswick.

There are several problems with not having a ‘core’ exports rate.  The first is what I call the Kirk MacDonald problem.  When he was Minister of BNB he bragged of the billion with a ‘b’ increase in exports since his administration had taken office when he knew full well that exports (other than the refinery) were collapsing down by hundreds of millions of dollars worth.  But the newspapers only picked up on the billion with a ‘b’ increase.

The bigger problem is that we don’t get an assessment of other trends in exports that are smaller but maybe much more impactful than an increase/decrease in refined oil exports.  For example, seafood exports are down 7 percent over 10 years and in real dollar terms much greater.  Fishing exports have dropped by 34% and aquaculture down 14%.  Is the fishing industry in a state of decline or has it bottomed out?

We have seen fairly strong growth in mining exports (potash for one) but is this expected ton increase or decrease over the next decade?  What does the steep drop in electricity exports mean?

You get my point.  The refinery and a few forest products mills crowd out discussion about serious economic trends in other sectors.

3 thoughts on “Measuring economic activity in NB: A different perspective”