My column today looks at the tepid employment performance of the NB economy.   While the media coverage has been sparse – New Brunswick’s three years of no new job creation should start to worry someone.   According to Statistics Canada, in 2007 there were 357,100 employed persons.  By 2010, there were 356,100.    It’s one thing to underperform the national average.  It’s quite another to be dead last.   As I point out in the column, if there was a foreseeable jobs boom on the horizon this might be considered a blip but I can’t see one.

The implications of this are also hard to know for sure but are not likely to be good.

Five Ps to help to change this:

1. Performance: Get Invest NB rolling with a fresh mandate and a highly dynamic and engaged team of sales guys/gals.  While many are skeptical, I think this organization should be able to stimulate considerable new investment by getting focused and building a high calibre team.  The feedback loop into building a stronger value proposition for investing will also be strengthened.

2. Partnerships: Build strong industry association/cluster groups around key growth sectors.  I hesitate to even use the word association because I am not talking directories and golf tournaments.  I am talking about key stakeholders in growth sectors taking a more direct lead on the direction of the sector rather than leaving it to government.   That is even strange to say but it is true.    In my ideal world, businesses, government, R&D organizations and education stakeholders would be in a room charting a path for the sectors with high growth potential and then building a joint plan to make it happen.

3. Positive role for Government: Have a far more clear and value added role for government.  We have talked here about my theory that economic development in New Brunswick has become a euphemism for providing financial support to SMEs so no need to go further on that.  Just to say that government should have a more holistic understanding of how it (as over 1/3 of the economy) can positively and negatively impact economic development.

4. People: We have got to figure this out.

5 Productivity:  New Brunswick’s economy, its SMEs and its big companies need to be far more focused on innovation and productivity.  A lot of people hold their noses when the Feds gave AV $19 million this week for a major innovation at their NB facilities that will drive down their cost of production and make them more competitive.  Without getting too far into this discussion, it seems this is a far better investment compared to a loan guarantee or grant to keep a company afloat until the next election.  Innovation is about shifting the cost curve downward – and this helps AV do that. 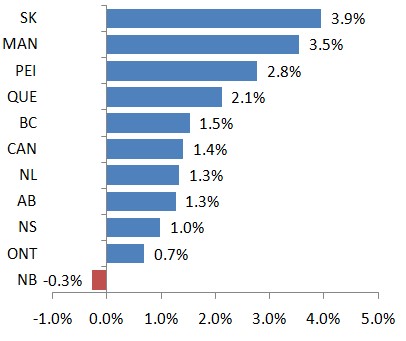 2 thoughts on “The new normal?”