I have been chatting with folks who think about this stuff all day long and they tell me that Premier Alward is in a good position.    He will likely raise some taxes but not HST or income tax, announce some cuts and budget freezes and layout a 4-5 year plan to get back to balanced budgets.   He will be criticized for not going far enough with the cuts and those who were cut will feel somewhat relieved (“it could have been worse”). It was suggested to me that even an HST rise in the next budget could be framed in this one.  If ‘experts’ criticize him for not raising the HST, that may give him cover to use this tool next budget.  It is interesting that everyone from union leaders to the great Jack Mintz himself (architect of Graham’s tax cut strategy) have said the province should raise the HST (with protections for lower income NBers) but the Premier has steadfastly said no.

As for the Fed budget, I don’t expect the kind of draconianism we saw in the mid1990s where places like Moncton and Halifax really were hurt but federal cuts to payroll and northern NB was hurt by changes to EI and other transfer cuts.  Because there is an election coming, I suspect there will be sober talk of the need for fiscal discipline and then a roadmap for cutting spending over a 4-5 year period.    I do not expect the feds to raise any taxes of significances.  As for NB,  you can assume squeezing and tweaking (cutting ACOA by some but not huge for example) and you can assume employment freezes.  A relatively unreported story has been the rise of federal employment in New Brunswick over the past decade.   This has added tens of millions of dollars in high value salaries to New Brunswick.  You can expect this growth to stop but likely not retard too much.

Again, the government will be retrenching and if the private sector doesn’t start investing and creating jobs, we are in for a long flat – possibly negative – run. 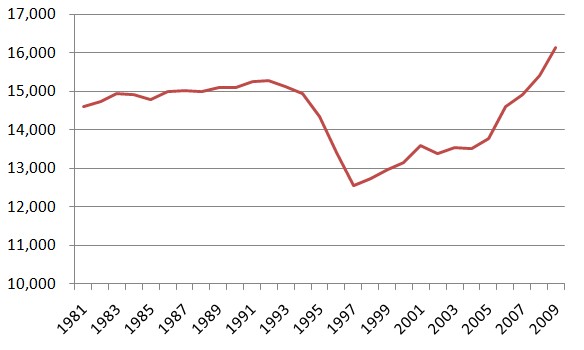