I have received eight emails in the past day or so about my column yesterday lamenting the fact that ‘self-sufficiency’ has disappeared at least from the politic-speak these days.

I realize the label was confusing to some but the idea of reducing our dependence on federal transfers and focusing on building a strong enough provincial economy to pay for our public services and programs was a worthy one – on multiple levels.  First, since the Equalization program was set up the ability of the economy of NB to pay for public services and programs has been slowly eroding until we now only generate about 59% of the revenue from in-province sources – the second lowest percentage of the 10 provinces.

In other words, one could argue the Equalization program has done its job – by most measures New Brunswick has equally well funded public services as the average province – but it may have had unintended consequences.

And I think there is an increasing risk that the Equalization program will be ratcheted down in the coming years.  I had forgot that the PM had said he would look at removing non-renewable resources revenue from the Equalization calculation – I read about the SK Premier this week pushing him on this.

That would be a game changer.  It would pull billions out of Equalization – probably several hundred million from New Brunswick or more every year.

No, of course, as former Premier Lord argued, we have a ‘right’ to equality in public services – it’s just I am not sure it’s a battle we can win.   The only reason Equalization was beefed up last time was to appease Quebec.

But beyond the risks associated with the Equalization program, I think there are broader issues at play.

I can’t say that one causes the other.  But I can say there is very little urgency at the Federal level to support the economic development of New Brunswick.  If the Equalization program was ratcheted down, the feds would, ironically, have more incentive to support economic development in New Brunswick because by hook or by crook we need the funds to pay for public services.

But it’s always been easier to throw more EI at New Brunswick than to throw serious thinking and resources behind economic development.

And one last point.  The following graph shows the average annual population growth rate in Canada and in Atlantic Canada since 1971.  If the federal government was serious about economic development, this chart would matter.  Population is obviously not the only metric that matters, but healthy dynamic economies tend to add population – at least at a moderate level. 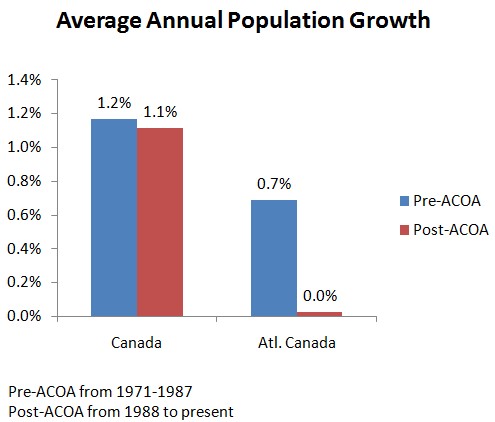 1 thought on “Whither Self-sufficiency?”