After Obama got elected, I heard a Republican commentator saying “who would want the job?”.  He went on to say that Obama would have to bear the brunt of the recession and that his party could regroup and get back into power when things were on an upswinga again.

There’s a grain of truth to this for  New Brunswick.  Whoever wins on Sept 27 will be facing a huge fiscal gap, a tepid employment picture and serious public policy challenges around energy, fed/prov funding, etc.

The following chart illustrates my point.  After the recession of the early 80s, Hatfield curbed spending somewhat (remember there was high inflation in the early mid 80s as well) but, in order to address the fiscal gap after the early 1990s recession, Premier McKenna had to cut spending to the bone – a little more than 1% average growth in spending for six straight years.  Then Camille Theriault and Bernard Lord came in and took advantage of a strong national economy and massive new federal transfers and raised spending to an average of closer to 5% increases every year.  The current government pushed that above 5% per year.

Where do you think the new Premier will be?  My guess is six straight years of 1% – just like McKenna.

Get ready for the new normal, folks. 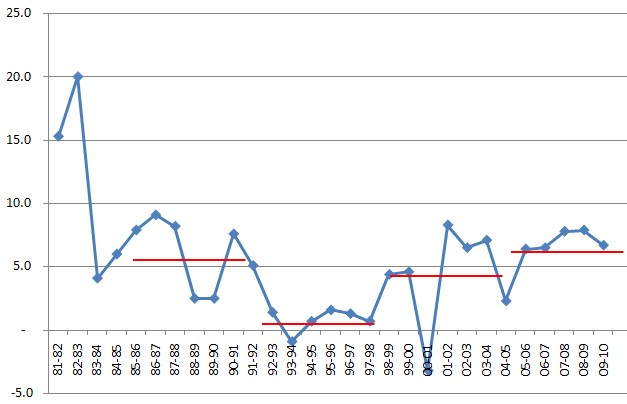 2 thoughts on “To the Victor go the Spoiled”