This election cycle, there has been a lot of articles, commentaries, op/ed pieces, etc. about the complex fiscal, demographic and economic challenges facing New Brunswick.   Even my stuff has been increasingly shrill (cough, cough).

The problem is that it is hard to translate this to retail politics.  As long as people have a job, a reasonable income, etc. they are not too concerned about issues of debt, NB Power’s long term health, the aging population, etc.

And we do have fairly low unemployment for New Brunswick standards.  If you realize that the unemployment rate is biased upwards structurally in New Brunswick because of our seasonal industries, it is really very low in absolute terms (assuming folks in seasonal jobs are not ‘really’ unemployed – they are just waiting for their job to start up again).

There are pockets of high unemployment like the Miramichi but most of the talk about job creation is not tied to current need but to the realization that our economy needs to create more wealth to pay for public services.    And and equally pressing reality that for everyone New Brunswicker about to leave the workforce (60-64 years old) we have 0.9 about to become workforce age (15-19).  The chart tells the tale.  In 1971, there over 3 people aged 15-19 in New Brunswick for every person aged 60-64.  Now there is less than one-to-one and this is projected to get much worse by 2020. 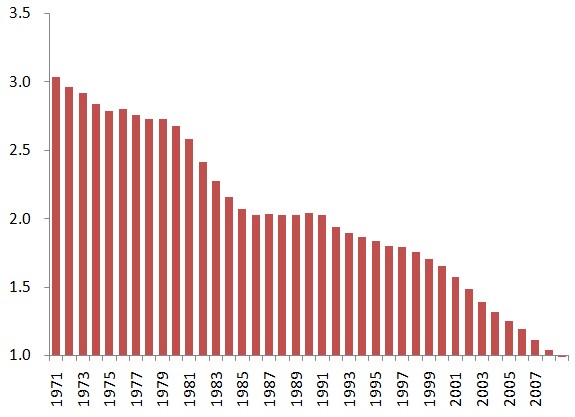 The following chart shows the percentage change in this ratio over the forty year period.  It actually improved a few years in the 1980s but since the late 1990s, it has dropped steadily. 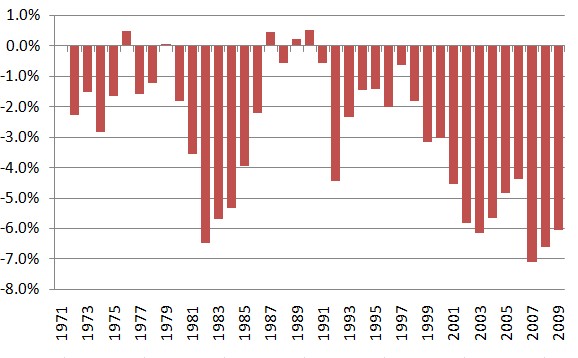 We need the jobs, but unlike Hatfield, McKenna and Lord, we will have to stop the out-migration and start attracting far more people as well.

This adds another degree of complexity to our economic development efforts.  It was one thing in 1995 to go out and tell UPS, Xerox, IBM, Exxon, etc. that we had lots of available bilingual workers.  It’s quite another to go out and tell companies that if they set up here (or expand here), people will move here for the jobs.

So back to my original point – people are right to be ratcheting up the tone of things because it is worse today than it was 10, 20 or 30 years ago on a variety of fronts.

But the public doesn’t really feel it yet.  We haven’t had to cut public services.  We haven’t raised taxes (we’ve lowered them).   The low spread between young and old populations actually drives down unemployment so we don’t feel that as acutely as before.

And the tiny attempts at cuts or changes during Lord and Graham were met with swift negative reaction.  I still remember the small consolidation of hospitals under Lord’s time.  People were livid.  The Upper SJ River Valley has more beds now and more services than ever before but because they have to drive 15 minutes further to get to the hospital – angry.  Same in the Peninsula.

It’s going to be tough times but it’s not all bad.  We live in Canada and no matter what happens to the provincial fiscal situation, our essential public services are protected.  Worst case scenario, people leave – move to Alberta.  Tens of thousands of senior citizens are moving to Kelowna and the temperate B.C. climate in that area.  This is Canada – people can come and go as they please.

I think that the main point is there are some folks who want a better future for New Brunswick.  New Brunswickers – for the most part will be fine whereever they end up (comparatively) but New Brunswick – the place – has some tough times ahead.