This report came out yesterday from Statistics Canada showing the amount of R&D in the higher education sector in Canada.  I reported not that long ago that R&D in businesses in New Brunswick (funded by all sources) is now higher than several other provinces in Canada.  However, overall R&D expenditures in New Brunswick remain dead last in the country due to the following table.  The table shows the amount of spending in the higher education sector on R&D by source of funds.  New Brunswick is last in Canada across just about every category.

The fact that the feds are wildy underfunding R&D in New Brunswick continues to amaze me.  I would expect some variation but we are lower than the next lowest province for federal R&D by 27% (per capita).  Hopefully the new medical school activity in New Brunswick will start to put a dent in this.

I won’t let the province off the hook, however. Former Premier Lord talked about moving New Brunswick into the fourth position in Canada for R&D spending per capita.  Look at how much more the Quebec, Ontario, Alberta and BC governments spend on R&D in higher education.  This certainly must be a case where the government should lead by example.

We have been paving every single road in the province in an effort to stave off recession.  Putting 10% of that ‘stimulus’ money into R&D would be a serious catalyst for long term economic development.

But look on the bright side. Hundreds of millions into paving means less trips to Canadian Tire for wheel alignments.

Estimates of Research and Development Expenditures in the Higher Education Sector, 2007/2008 – Per Capita 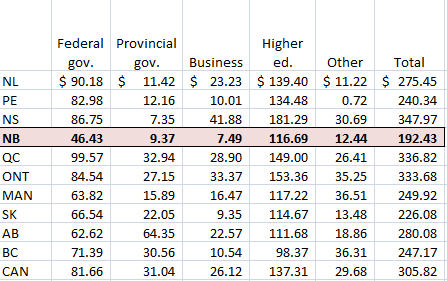 5 thoughts on “R&D in universities”