Here is one of those little stats that doesn’t mean much but is mildly interesting. This is the per capita spend on eating out among the 10 provinces in Canada (for May 2009).

It’s a slow day, what can I tell you.  The previous commentator suggested we have a penchant for fast food and eating crap so I took a quick look at the NAICS data to see.  The following table shows the results.  Remember with NAICS there is always some spillage between the categories because a company can fit into more than one.  In general, Full Service Restaurants are those with waiters/waitresses, limited service are those where you pay before you eat (fast food) and drinking places are pubs/bars.  That doesn’t mean that you can’t get food in 722410 but the establishments primarily exists to serve booze. 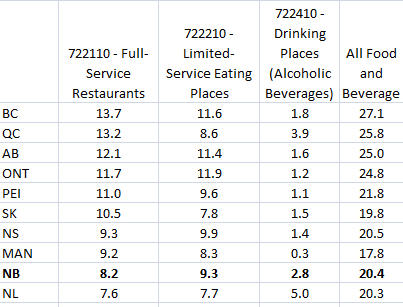 What do we learn here?  Not much.  Except NB does have the second lowest percentage of ‘full service’ restaurants among the 10 provinces – well below BC, Quebec, Alberta, etc.  Even PEI has 34% more full service restaurants.  NB has more fast food joints than four provinces but is below five provinces.  NB does have the distinction of having more watering holes – only the Newfoundlanders and the booze hounds in Quebec have more.  New Brunswick has double the drinking places of Nova Scotia and 2.5 times as many as PEI (per 10,000 population).

Unfortunately, there is little data that I can find that indicates ‘quality’ of the food.

Now back to my regularly scheduled programming.

9 thoughts on “Meaningless but interesting”