I came across this poll last week.  It was done last fall and published in Canadian Business magazine.  The survey was entitled When Local Governments Compete for Business: Excellent Workforces Are Very Appealing, But Not Good Schools or Entertainment.

The primary question was:

On a 7 point scale where 7 means very important and 1, the opposite, please score each of the following factors as reasons why you would choose or recommend one municipality.

Here were the answers. 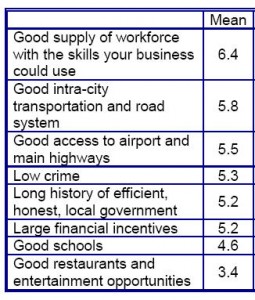 Now, a couple of people said I was harsh when I condemned the Miramichi Leader editorial last week complaining that the new four lane highway between Miramichi and Moncton would primarily benefit Moncton.  To the Leader, I say this.  Where on this list of top site selection factors is the retail sector?  It’s not even on the list.  Restaurants and entertainment were the lowest ranked issue.  What were two of the top three?  Good intra-city (i.e. Miramichi to Moncton) transportation and good access to airport and main highways.

The Miramichi Leader should spend far more time worrying about how the community is going to grow its manufacturing, ICT, animation, etc. than the potential loss of retail shoppers to Moncton.

4 thoughts on “To Plaster Rock or Moncton? I report, you decide”