Everyone has Maclean’s disease these days – I guess that should make Andrew Coyne happy.  The Globe & Mail has a story this morning entitled “Job Seekers Swarming to Atlantic Canada” even as it reports there is still a net out-flow of people from the region to the rest of Canada – but the out-flow has lessened since 2006 so that equates to a swarm of in-migration.   Hmmm.

Other interesting points from the article include:

The articles talks about the region being ‘insulated’ and ‘cushioned’ from the effects of recession.  Translation?  We never were able to grow auto or aerospace manufacturing or a serious pharmaceutical industry or a major financial services cluster, etc. etc. etc. – and therefore, when they turn downward we are ‘cushioned’.  Funny use of that word.  I heard this morning about the early days of ‘credit’ cards in North America.  No one would have used something called a ‘debt’ card (which is exactly what it was) because back then the term ‘debt’ was far more negative that it is today so they engineered the term credit card and beat it into peoples’ heads.  Now we get a credit card which means we get credit!  Same thing when people are fast and loose with terms like cushioned.  You have people all over Atlantic Canada pumping out the chest saying “Look at us”.  I wonder if Ontario plans on expelling the 3.3 million people that moved to that province over the 10 years that New Brunswick actually saw a small decline?  “Look at us indeed”

The only time New Brunswick is mentioned in the entire article?  “New Brunswick and Newfoundland have shed roughly 3,000 jobs apiece in that time, Statistics Canada calculates.”  Nice.  They could have thrown in a bone – something about energy hub or something.

There is a good chart aligning the decline in out-migration (and even in-migration) with Canada wide recessions.  That is not particularly telling as it is intuitive that when things turn sour in Ontario, some ex Atlantic Canadians will want to move home.

For me this stuff reinforces more than ever the need for this region to create good quality, high paying jobs. It confirms that people will indeed move here (surprise surprise) when the economic conditions make sense.  They will move here to work in Lockheed Martin or RIM or Flagstone Reinsurance Holdings Ltd. with its $100,000+ salaries.  Geez, where do I sign up?  Think I could fake derivative and reinsurance product experience?  I can’t even balance my cheque book.

In the end this story is a good one for Atlantic Canada as it presents this region in a more positive light than 90% of the articles usually found in the G&M.  But it’s a bit of a bitter pill when the only reference to New Brunswick is about the 3,000 job losses.  Even Newfoundland got a favourable reference “And the most optimistic businesses in the country these days reside in Newfoundland and Labrador, a Canadian Federation of Independent Business poll showed this month.” 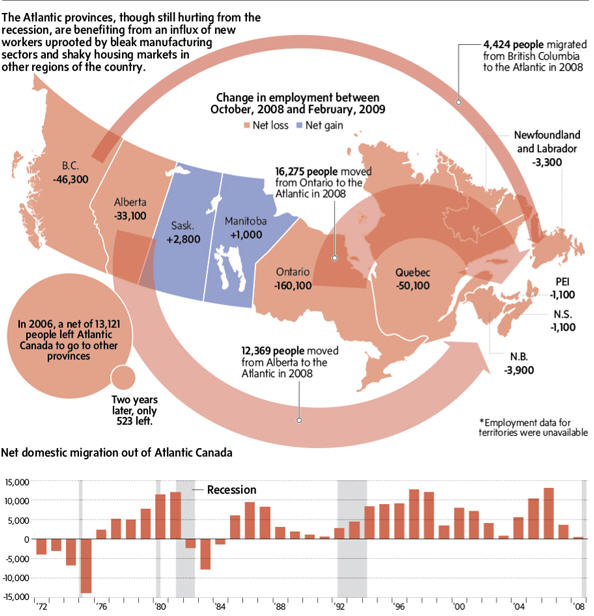 11 thoughts on “The swarm of workers is coming – watch out”