We have talked on this blog alot about India and Ireland and the need to evolve the call centre industry into a more IT and technology-based economy – much like this commentary talks about here.  I guess we shouldn’t be too strident in our position on this, however.   As he is chiding New Brunswick for not developing its IT sector it is worthwhile to point out that from 1996 to 2006 both Saint John and Moncton had faster growth rates in IT workers than Vancouver or Toronto and as of 2006, there were just about as many IT workers in the labour force in Saint John and Fredericton as in Vancouver (relatively speaking).

Only Toronto can claim to be way out front in terms of IT workers.

But the guy’s thesis is worth a look. 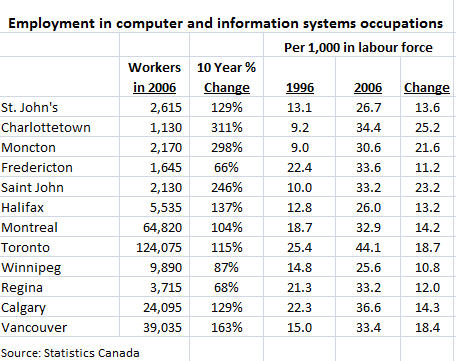