One of the most complicated issues in economic development – believe it or not – is the issue of wage rates.  Specifically, I am talking about the effort to try and foster business investment at a relatively high wage rate.  For example, many U.S. state and county level tax incentive programs now require that companies pay above the median hourly wage in a county to access the tax incentive.

I have strenuously advocated against economic development efforts that try to replace high wage jobs – for example in the forestry sector – for low wage jobs in the tourism sector.  I find that advocates of this approach (and there are many) think that tourism is a more logical fit for most of New Brunswick than trying to attract manufacturing or higher end service industries.

However, I don’t think the line is completely clear on this.  The CN Rail workers in Moncton (over 2,000 in the 1970s) were certainly paid more than the average call center worker today 30 years later – not adjusted for inflation and yet overall wage rates have steadily increased and have actually be closing the gap on the higher average wage levels in Fredericton for example.  How can it be that call centre jobs at $10-$15/hour can compete against an economy that has a very high concentration of government jobs?  Upon analysis of the data, it seems that the call centre industry has pulled up wages at the lower end of the spectrum.

Consider the following table from the Census.  You will see that the median employment income (adjusted to the 2005 level) went up very strongly in industries that would pull workers from (secretarial, food service – forgive the typo – etc.).  But we see that other professional wages went up strongly as well such as computer programmers.  It looks like the spread between between the high and low wage pattern in 1970s Moncton has shrunk.  In other words, the call centre industry has been influential in rising the overall wage levels even though the industry itself is slightly below the average levels (consider that in 2005 the average secretary still earned more than the average call centre worker). 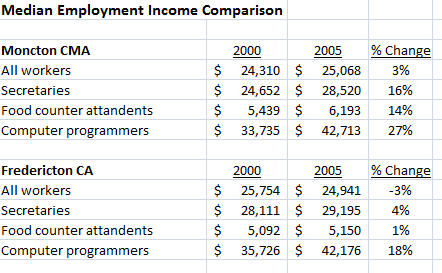 So what can we deduce from this?  That we should run out and try and foster jobs that offer below average wages? No.  It seems to me that it is far more about alignment of job creation efforts with the skillsets of the workforce.  For Moncton there were thousands of people in the early 1990s being paid relatively less (in retail, secretarial, reception, finance, bookkeeping, etc.) because the market allowed it.  The call centre industries put upward wage pressure on those sectors which ended up driving up wages (not at an outrageous pace but above most of its competitor cities in Atlantic Canada).

But I still can’t make the leap to say that New Brunswick should still be in the business of actively incentivizing $10-$11/hour job creation.  I think the landscape has changed and we need to support economic development efforts that lead to business investment and job creation in industries that pay above the median wages.

That is why I was concerned with this report that someone sent me to read this week:

A recent report challenges the assumption that newly created green jobs will be “good,” middle-class jobs. The report, High Road or Low Road: Job Quality in the New Green Economy, authored by Good Jobs First and commissioned by Change to Win, Sierra Club, the Laborers’ International Union and the International Brotherhood of Teamsters, examined existing green jobs in manufacturing, construction and waste-management. The research revealed wide variations in wages, benefits and labor conditions, with some green-collar jobs paying as little as $8.25 an hour without benefits. For more information, click here.

I have been advocating that New Brunswick attempt to grow a green energy manufacturing sector but it would need to pay well above some of the wage levels reported in this document.  There is one plant that is paying $22/hour – which makes far more sense to me.

I think that economic developers and policy makers should be concerned about this stuff.  We know that the energy hub projects tend to be well above average in terms of wages (refineries, nuclear plants, heavy construction) but we know that tourism and even many of the call centre jobs that are still being incentivized are well below average.

I don’t think you can engineer industry wage rates.  The only thing governments can engineer directly is the minimum wage rates.  But government policy and economic development programmes can influence the level of wage rates paid and I think this should become part of the discourse.