I just read Statistics Canada’s new Employment Insurance Claimant report covering November 2008.   The number of regular EI beneficiaries increased in all jurisdictions compared with a year earlier. Ontario (+28.2%), British Columbia (+24.6%), Nunavut (+21.9%) and Yukon (+21.3%) posted the largest year-over-year increases in regular EI beneficiaries.  The number of EI regular beneficiaries increased in most census metropolitan areas in the past year, with the largest year-over-year advances occurring in Oshawa (+99.1%), Windsor (+57.9%) and London (+46.5%).

There is no question those are concerning figures but just to give a little context, below is the number of regular EI claimants for November 2008 by province per 1,000 population. I realize it is cold comfort for those newly unemployed in ontario but to reach the level of EI beneficiaries in New Brunswick, Ontario will need to see the number of people collecting EI more than triple.  Unlikely. 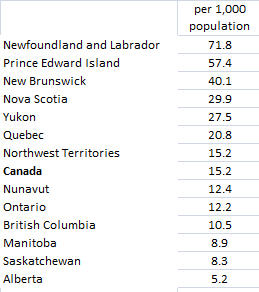